Olive Barrymore Kopelman
Frankie Barrymore Kopelman
Drew Blyth Barrymore is an American actress, film director, screenwriter, producer, and model. She is well known for her roles such as Gertie in Steven Spielberg's 1982 classic E.T.: The Extra Terrestrial. She later starred in several comedy films such as Never Been Kissed, Charlie's Angels, 50 First Dates, Fever Pitch, and Blended. She also voiced Akima in the 2000 Don Bluth animated film, Titan A.E. and Maggie Dunlop in the 2006 animated film adaptation of Curious George.

For Disney, she voiced Chloe in the 2008 Disney comedy film, Beverly Hills Chihuahua. She has also cohosted some Disney TV specials in the 1980s, including Epcot Center: The Opening Celebration (alongside Danny Kaye) and Disneyland's 30th Anniversary Celebration (alongside John Forsythe). She even played Casey Roberts in the 1995 Touchstone Pictures film, Mad Love and appeared in the Bill Nye the Science Guy episodes about flowers and life cycles.

She is also the granddaughter of John Barrymore and grandniece of Lionel Barrymore.

Chloe
(Beverly Hills Chihuahua)
Add a photo to this gallery 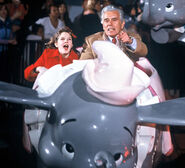 Drew Barrymore at premiere of Going the Distance in August 2010.

Drew Barrymore arrives at the 71st Golden Globes in January 2014.

Drew Barrymore visiting The Late Show with Stephen Colbert in March 2017
Add a photo to this gallery
Retrieved from "https://disney.fandom.com/wiki/Drew_Barrymore?oldid=3947598"
Community content is available under CC-BY-SA unless otherwise noted.