As a remaster of the iconic NES title, it features HD graphics, exclusive cutscenes, unlockable content, and most of the original voice cast from the TV show. Along with these new additions, the game maintains its classic platforming style with the stages having enhanced soundtracks, as well as a few minor modifications to improve the flow and design of the gameplay. Like the NES title, Remastered's plot revolves around Scrooge McDuck and his nephews Huey, Dewey, and Louie as they travel across the globe in search of Five Legendary Treasures.

Capcom released the game on PlayStation Network, Nintendo eShop, and Steam, on August 13, 2013, with the Xbox Live Arcade version launching on September 11th. On August 20th, a retail PlayStation 3 version was released that included a code to download the title and a DuckTales collector pin.

The Beagle Boys attempt yet another raid on Scrooge's money bin, with Baggy, Burger Beagle, and Bouncer Beagle capturing Huey, Dewey, and Louie. After Scrooge rescues them, he finds Big Time Beagle in his office with a painting in his hands. With the help of Duckworth, Big Time is defeated and retreats.

The painting reveals the locations of five treasures and Scrooge wastes no time setting out to find them.

Scrooge and Launchpad visit the Amazon to find the Sceptre of the Incan King. They uncover the hidden temple of Manco Capquack, but the sceptre is lost and the temple is destroyed by its guardian statue. The chief of the natives then approaches Scrooge and Launchpad and thanks them for returning their city to them and gives Scrooge the recovered Sceptre in return, which was just the king's back scratcher.

Scrooge, the nephews, and Webby travel to Transylvania and visit the castle of Drake Von Vladstone (also known as Dracula Duck), who was the heir to the Coin of the Lost Realm. The boys fall into a trap door and are spread throughout the spook-infested mansion, but Scrooge saves them from the Beagle Boys disguised as ghosts. They uncover a mirror where Magica De Spell reveals herself, who is also after the Coin. Scrooge and Magica then face off for it, but the sorceress is defeated and retreats empty-handed.

Scrooge, the nephews and Gyro Gearloose travel to the African Mines to find the Giant Diamond of the Inner Earth, but they find the workers being scared off by voices and earthquakes, claiming that the mine is haunted. Deep underground, Scrooge discovers that the Terra-Firmians and their "Great Games" are the cause and after interfering, he is attacked by their king. Defeated, the king makes an agreement with Scrooge to stop the games in exchange for allowing the mining operations to continue, as it will rid them of the diamonds, which they consider to be "garbage rocks". He gives Scrooge the Giant Diamond to start with.

Seeking the Lost Crown of Genghis Khan in the Himalayas, Launchpad crashes into a mountain far from their destination and loses a spare fuel regulator, which is further spread throughout the level by rabbits. While recovering them, Scrooge stumbles upon Bubba the Caveduck who is frozen in ice. After freeing Bubba and retrieving the scattered pieces of the fuel regulator, Scrooge discovers that Webby snuck along for the ride. After getting the plane airborne, they are all ambushed by Flintheart Glomgold and the Beagle Boys. After dealing with them, Scrooge goes to confront a Snow Monster, but Webby intervenes and reveals that the monster was angry because it stepped on a thorn. As Scrooge suspects, the "thorn" is the Lost Crown.

Scrooge, Gyro, and Fenton Crackshell travel to the Moon to find the Green Cheese of Longevity, able to breathe in space due to eating Oxy-Chew (a special oxygen-flavored gum that Gryo had invented). Fenton gets abducted by aliens along with the Gizmoduck suit and after being saved by Scrooge, he becomes Gizmoduck and blows open a door that leads underground. Glomgold and the Beagle Boys take advantage of the opening and Gizmoduck goes after Glomgold. Scrooge deals with the Beagle Boys and discovers the Green Cheese before they do, but a rat from the alien ship eats it and mutates, becoming gigantic. Scrooge defeats the rat, changing it back to normal and acquiring the Green Cheese.

After collecting all of the treasures, Scrooge finds the nephews taken hostage by the Beagle Boys and Glomgold, who bargains their safety for the treasures. After Scrooge agrees, Magica suddenly appears, claiming that she was the one who sold Scrooge the painting of Drake Von Vladstone to have him seek out the treasures for her, which are part of a spell to revive him. She steals the treasures, turns the Beagle Boys into pigs and kidnaps the nephews, telling Scrooge to bring her his Number One Dime in 24 hours if he wants to save them.

Scrooge and Glomgold form a partnership to save the nephews and retrieve the treasures. When they reach Magica's lair in Mount Vesuvius, Glomgold steals the dime and the two villains reveal that they were working together the whole time. Magica summons Dracula Duck and orders him to destroy Scrooge, but he is defeated and perishes.

With the nephews saved and the place falling apart, Scrooge goes after Magica and Glomgold, who lose the Number One Dime. Scrooge races against them to retrieve it, succeeds and narrowly escapes from being caught in the eruption while the two villains escape as well.

Having lost the five treasures, Scrooge tells his nephews that the adventure was still worth it and that they all got to share it together. Glomgold and the Beagle Boys are arrested and Scrooge decides to celebrate with the nephews at the ice cream shop, declaring that this time, they can each get a cone with ice cream in it.

The game reunites the then surviving voice cast from the original series, all reprising their respective roles. However, the characters whose original voice actors have since passed away were recast. This game would notably mark the final performances for June Foray as Magica De Spell, Chuck McCann as Duckworth, Burger, and Bouncer, and Russi Taylor as Webby (she would continue to voice the nephews in the Kingdom Hearts series and the Mickey Mouse Shorts series prior to her death in 2019).

Beyond the obvious graphical facelift and the addition of voice acting, DuckTales Remastered contains several notable differences from its original 8-bit counterpart:

A soundtrack album containing songs from this video game and also the original version was released on digital download on April 29, 2014. 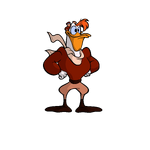 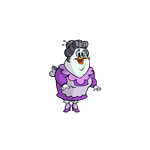 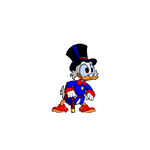 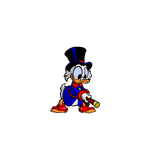 Ready for the cane swing 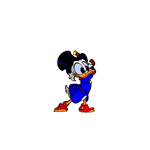 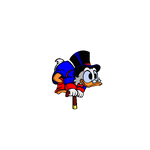 Storyboard to cel of Huey, Dewey, and Louie.

Progression art of Huey, Dewie, and Louie from the show.

Artwork of Fenton and Gandra Dee.

Artwork of Gyro from sketch to color.

Sketch and color of Glittering Goldie and Beagle Boys.

Sketch and color for Gizmoduck.