E
DuckTales is a video game based on the Disney animated TV series of the same name. It was first released in the United States for the Nintendo Entertainment System by Capcom in 1989. In this game, Scrooge McDuck travels around the world collecting treasures to become the richest duck in the world. The game was also ported to Game Boy. This game is unrelated to DuckTales: The Quest for Gold, which was released on a variety of personal computers around 1990.

DuckTales is often a subject of NES-related nostalgia and was generally popular. The game provides a good example of the work produced by Capcom in the late 1980s and early 1990s, along with such titles as those in the Mega Man franchise; both shared key personnel such as Tokuro Fujiwara, Keiji Inafune and Yoshihiro Sakaguchi. DuckTales has much in common with the Mega Man games: bright and colorful graphics, tight play control with unique gameplay dynamics (such as using Scrooge's cane as a weapon, tool and pogo stick) and non-linear gameplay.

The player controls Scrooge McDuck, the richest duck in the world, on a quest for even more treasure so he can jump using the A button; his cane is used as a weapon to defeat enemies or strike objects (B button) and as a pogo stick to jump higher (A then B + Down). There is a wide variety of helpful non-player characters and enemy characters.

DuckTales comprises five levels that can be played in any order. A boss guards the treasure that Scrooge seeks at the end of each level. There are also two hidden treasures: a golden ring in the African Mines level and a golden mirror in the Moon level. Upon finishing all five levels, the player is directed back to Transylvania for the final boss fight. DuckTales contains some non-linear gameplay, in that the player can revisit levels to get items that unlock parts of other levels.

The NES version of DuckTales contains an alternate ending shown when the player finishes the game with at least $10,000,000 and has found both hidden treasures. The alternate ending consists of the same newspaper at the end of the game except the picture shows Scrooge McDuck with a crown on his head, and the paper also states that he "stunned the world with his discovery of 2 Lost Treasures".

There is another, lesser-known alternate ending, shown when the player finishes the game with $0. Doing so requires very careful planning and is the most difficult ending to obtain. Scrooge is seen sobbing and the newspaper states that he has "lost his fortune in his search for the legendary five treasures. He will use them to rebuild his empire."

There were many differences between the beta version of the game and the final release. Many of these differences were seen in the 1990 book Consumer Guide: Hot Tips for the Coolest Nintendo Games.

DuckTales was also known as La Bande à Picsou in the French NES version, after the popular TV program of the same name (the French version of the DuckTales cartoon). The Japanese version of the game, Wanpaku Dakku Yume Bōken (わんぱくダック夢冒険, lit. Naughty Ducks Dream Adventures, the Japanese name of the show), featured the same changes that were present in the western releases of the game (contrary to popular belief).

DuckTales (ダックテールス Dakkutērusu) was later ported to the Game Boy. That version features the same gameplay, music and levels with different sound and graphics. The layouts of the levels were changed slightly due to the lower screen resolution. In addition, the player only needed to press the A and B buttons for Scrooge to cane jump in the Game Boy version, unlike the NES version where you also had to press the down button.

A sequel, DuckTales 2, followed in 1993. It didn't match the success or popularity of its predecessor, as consumers were focusing on the 16-bit consoles by that time, though the Game Boy version sold very well.

DuckTales was released to generally positive reviews, praised for its gameplay and soundtrack. Of particular importance is the "Moon" stage theme, which has since become one of the iconic tunes of the late 8-bit era (ScrewAttack listed it at #6 in its Top 10 Video Game Musics, where it was described as evoking the feel of the video game industry's recovery from the 1983 crash). The graphics were considered above average for the time. The characters were part of a popular Disney franchise and were easily recognizable. The game is considered a classic among many NES enthusiasts. Nintendo Power listed it as the 13th best Nintendo Entertainment System video game, praising it as fun in spite of being a licensed video game. The game was also a commercial success, as Capcom cites the game as having sold 1.67 million copies worldwide.

A soundtrack album containing songs from this video game and also the Remastered version was released on digital download on April 29, 2014. 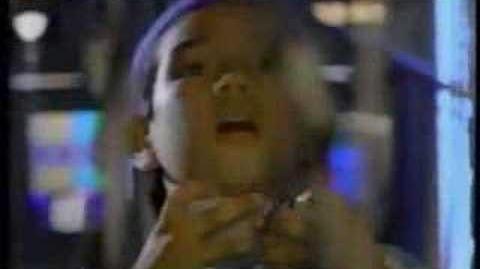 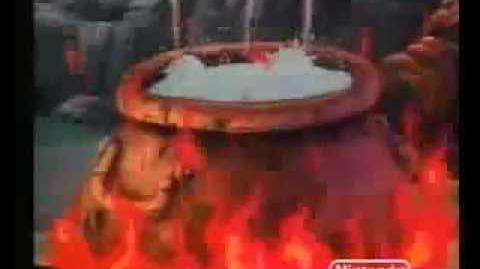 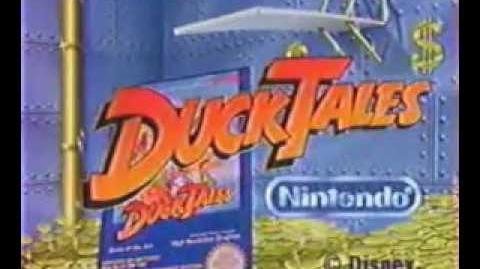 Artwork used for both the NES and Famicom versions 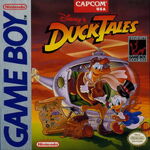 The cover for the Game Boy version (USA and Europe)

Scrooge using his cane to hit

Scrooge Pogo-jumping off a Slug

Treasure Box with a Diamond popping out

Creature from the Duck Lagoon

The King of the Terra-Fermies

Scepter of the Incan King

Coin of the Lost Realm

Magica in her vulture form