Sport Goofy in Soccermania
DuckTales the Movie: Treasure of the Lost Lamp
Mickey's Twice Upon a Christmas

Still Standing
Duckburg is a fictional city that appears in various Disney comic books and animated projects, located in the fictional state of Calisota. In the comics and cartoons, Duckburg is the home of Donald Duck, Daisy Duck, Scrooge McDuck, Huey, Dewey, and Louie Duck, and most of their supporting cast. Duckburg was created by Carl Barks and was first mentioned in Walt Disney's Comics and Stories #49 in 1944.

Duckburg has been given a long history by many creators, including such writers as Carl Barks and Don Rosa.

As revealed in the comic His Majesty, McDuck, the location that would eventually become the centre of Duckburg was originally known as "Fort Drake Borough," a fort built in the 16th century by British explorer Sir Francis Drake. By the 19th century, the fort had been handed over by its departing British occupants to Cornelius Coot, who renamed the fort "Duckburg". "Drake" means a male duck, while "borough" and "burg" are synonyms meaning a town or district that is an administrative unit.

According to The Invader of Fort Duckburg, part 12 of the Eisner Award-winning comic book series The Life and Times of Scrooge McDuck, Duckburg remained a quiet, small town until the arrival of wealthy businessman Scrooge McDuck. McDuck had purchased the old fort from Casey Coot, a descendant of Cornelius. Scrooge proceeded to construct his famous money bin and established various businesses in and around Duckburg. This construction caused Duckburg's population to swell and turned the small town into a bustling city within several decades' time.

Duckburg is probably the largest city in the state of Calisota, but not its capital city. There are no references to the governor, legislature, capitol, etc., of Calisota in several comics with Duckburg as its main setting. Duckburg seems to have its own governor; therefore, it could be a sort of city-state. In more than one story, a "Duckburg embassy" is shown, which would place it outside the USA at a legislative level. In a story by Barks, the Duckburg embassy displays a flag of Duckburg, which consists of a white duck over a green field.

Duckburg maintains a traditional rivalry with Goosetown, a nearby town.

In the revived series of Ducktales, Cornelius Coot founded Duckburg after using his saber and musket fire from all directions to defeat and scare off the Beagle military.

Duckburg was the setting of the 1987 animated featurette Sport Goofy in Soccermania and the animated series DuckTales. The cartoon version of Duckburg was based heavily on the comic book version.

Duckburg also appeared in the 1996 animated series Quack Pack. In this series, Duckburg was populated almost entirely by human beings, with Donald, Daisy, Donald's nephews, and Ludwig Von Drake as the only anthropomorphized animals that usually appeared. Moreover, the Money Bin is nowhere to be seen.

Duckburg was the setting for the second level of the video game Donald Duck: Goin' Quackers!

Although it is not seen onscreen, Duckburg is referred to in Darkwing Duck by GizmoDuck, who mentions to Darkwing that Duckburg is his hometown (in reference to GizmoDuck's appearances on DuckTales). A "Welcome to Duckburg" billboard featuring Scrooge McDuck was also seen briefly in the episode "Tiff of the Titans". In Boom! Studios' Darkwing Duck comics, Duckburg is revealed to be close to St. Canard. Scrooge McDuck visits St. Canard to claim Quackwerks and shortly put Launchpad McQuack in charge of that company. Duckburg is later the second main setting of the non-canon crossover arc "Dangerous Currency".

Duckburg is the set for the intro and the main menu in the game DuckTales: Scrooge's Loot, this is the place where Scrooge McDuck's fortune is stolen by the Beagle Boys, Flintheart Glomgold, and Magica De Spell.

Duckburg was also used as the setting of Mickey's Birthdayland (later Mickey's Starland) at Walt Disney World's Magic Kingdom from 1988 to 1996. It even included Grandma Duck's Farm and a statue of Cornelius Coot, though it was more of a rural town than a burgeoning metropolis. The connection to Duckburg was removed when the land was renovated in 1996 to become Mickey's Toontown Fair. However, the Cornelius Coot statue remained until Mickey's Toontown Fair was torn down in 2011.

In the new DuckTales, Duckburg is on the opposite side of a bay from St. Canard.

In Legend of the Three Caballeros, Donald is seen at the start of the series living in a house in Duckburg before he is given his great-grandfather's cabana in the neighboring New Quackmore.

A view of Duckburg, as shown in DuckTales Remastered

The map of Duckburg in the 2017 series

Duckburg as it appears in Legend of the Three Caballeros 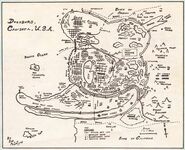