Ducky Momo is a character who appears, typically as cameos in Phineas and Ferb. It is a duck who is a popular children's television show character. Ducky Momo has appeared on numerous items of merchandise, some of which, including a rare collector's plate which was accidentally printed with Ducky Momo saying the completely out-of-character line "I hate people!" - are highly sought after by collectors. Said collectors are generally laughed at and would sometimes go to great lengths to get their hands on rare Ducky Momo merchandise without being ridiculed, with one fan even going so far as to sneak out of her house and attend a convention dressed as Ducky Momo herself.

Believed to be the same age as Candace, it is believed that the show has been around since the 1990s. It is assumed to be a very popular show, due to the amount of merchandise it sponsors. It has its own theme song, like any other show. Though the show is intended for children ages four through seven, Candace is still a dedicated fan of it at the age of 15 along with Carl, who is an upper teen, and Francis "Major" Monogram who is an adult.

Not much is known about the show's status or its production as of now. Ducky Momo was one of the shows on Ferb TV, though it is unknown if this was only a facsimile created by Phineas and Ferb for entertainment. In the show, Ducky Momo tried to find a bridge with the help of off-screen kids and a narrator, and proved to be extremely stupid after he failed to follow instructions and mistook a candy wrapper for a bridge. 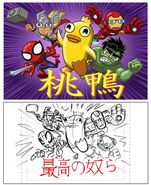 Retrieved from "https://disney.fandom.com/wiki/Ducky_Momo?oldid=3267270"
Community content is available under CC-BY-SA unless otherwise noted.