Ducky and Bunny are major characters in the 2019 Disney•Pixar animated film, Toy Story 4. They are a pair of carnival toys that have longed to have a kid to call their owner.

In the film, Buzz Lightyear is trying to find Woody in a crowded carnival, where he is found by a carnival game runner and tacked up on the top prize spot at a spaceship shooting game. This is where he meets Ducky and Bunny, two carnival prizes who are eager to be won. But when their plans are unintentionally interrupted by Buzz, who took their prized place, they find themselves on an unexpected adventure with a group of toys who have no idea what it feels like to be tacked to a prize wall, not being loved by a kid yet.

"Keegan-Michael Key and Jordan Peele, who voice Ducky and Bunny, are two of the most brilliant minds I've ever seen," said director Josh Cooley. "Of course, they are effortlessly funny, which would be enough. But they are incredible actors that understand a story. Their improvs weren't just for comedy sake, they were story motivated which elevated Ducky and Bunny and the film to a level I never could have expected."[1]

Roles in the film

The duo are first seen at the carnival game Star Adventure as top prizes for three years, until a worker puts Buzz Lightyear in their place. Buzz escapes and Ducky and Bunny immediately find him. Woody decides to take them on their rescue mission to save Forky at the antique store and have them live with Bonnie and the rest of the gang.

At the antique store, the duo imagines trying to do many of various things to spook the staff members such as surprise attacks but Buzz rejects these ideas. They steal a key and find Woody and Bo Peep at a machine where they meet Duke Caboom.

They accidentally run into Gabby Gabby and her troupe, but they fall out of the store. Woody begs everyone to return to the store, but they were too tired to go back. Bo Peep tells him no and Ducky and Bunny return to the carnival, while Woody returns to the store and Buzz Lightyear returns back to Bonnie's RV.

After Woody gave his voice box to Gabby Gabby, they return to help Woody and Gabby Gabby return to Bonnie. Unfortunately, a lost kid is seen crying around the carnival's exit. Ducky and Bunny roll a baseball at Gabby, and the girl spots Gabby Gabby and decides to keep her.

In a mid-credits scene, Ducky and Bunny help two frogs get out of the top prize spot.

In another mid-credits scene, Ducky and Bunny grow to an enormous size and attack the carnival with Bunny using laser eyes and Ducky breathing fire. It is then revealed to only be Ducky and Bunny's imagination. Woody and Bo Peep decide to help other toys in the carnival. Duke Caboom asks Ducky and Bunny if they actually have lazer eyes, to which they are shocked. 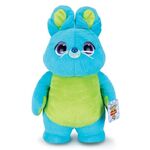 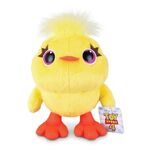 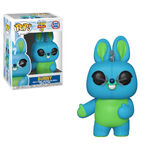 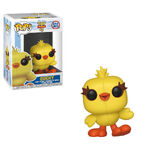 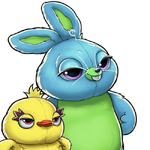 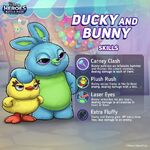