Having time with Carlos, being scratched

He is the mascot of Auradon Prep and he appears during the scene when Ben was training Carlos. Dude was chasing Carlos until Carlos climbed up a tree since Carlos's mother, Cruella De Vil taught him to be cynophobic his whole life. But Ben gave Dude to Carlos and the two began to bond throughout the movie.

During the video chat with the evil parents, Cruella De Vil is surprised to see Carlos with him. She says he would make perfect earmuffs but Carlos steps up and tells his mother that they love each other.

At Ben's coronation as Maleficent attacks, Carlos sends Dude to jump on her to prove good is stronger than evil. Maleficent is appalled by Dude's dog breath.

In Descendants 2, due to Dude ingesting a truth gummie Mal had made for Carlos he is granted the ability to talk, sometimes rather bluntly. While Ben goes to the Isle with Evie, Carlos, and Jay to get Mal back, Carlos tells Dude to stay home, and says the Isle is way too dangerous. Dude happens to stow away even though he failed obedience class.

In Descendants 3, Dude yells at Carlos for being late for Jane's birthday. But, he was unsuccessful as Carlos left with Mal, Evie, Jay, and Celia to the Isle of Lost to retrieve Hades' Ember.

Dude started to warm up to Celia as he felt that she was "friendly" and to get more pets. He helped the expanded group find Ben who was turned into a beast by Audrey. In the end, he appears to Jane and Carlos to warn them about meeting Cruella. 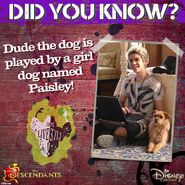 On the pirateship in Descendants 2