Not having the ability to do the stunts advertised in his own toy commercial, memories of disappointing his former owner Rejean

Duke Caboom is a Canadian stuntman toy and a major character in the 2019 Disney•Pixar animated film, Toy Story 4.[2]

Duke Caboom is a 1970s toy based on Canada's greatest daredevil and stuntman. With his trusty Caboom stunt-cycle, Duke has confidence and swagger as he shows off all of his stunt poses. But despite being a toy emulating Canada’s greatest stuntman, Duke has never been able to do the stunts as advertised by his own toy commercial. He’s been forced to relive his failures stuck on the shelves of the antique store.

Duke is first seen at Tin Toy's party when he encounters Woody and Bo Peep. He gets Woody, Buzz Lightyear, Bo Peep, Giggle McDimples, Ducky, and Bunny to the antique store to rescue Forky, but when they run into Gabby Gabby and her troupe, they exit the store and Duke crashes. Woody begs him and everyone to return to the store, but he and everyone leave and give up.

After Woody gives his voice box to Gabby Gabby, Duke returns with the gang and gets them to ground. Duke was happily proud that Gabby Gabby has gotten an owner, which inspired him to stay with Bo Peep and his new found friends. Duke was present when Woody returns to his gang but he choose to stay with them instead of returning to his owner. After Woody said goodbye to his friends, Buzz Lightyear and Forky, Duke and everyone begin their quest in finding lost toys find homes and owners.

In a mid-credits scene, Duke Caboom is present and surprised when Ducky and Bunny pretend to have laser eyes.

After the credits, he takes Luxo, Jr.’s place during the Pixar logo, and the winter Combat Carl appears to give him a high five, where Duke finally does so.

Duke Caboom appears as a spell used to hit enemies for fatal damage.

Duke Caboom appears in the game as the first hero of Toy Story 4 before Bo Peep and Ducky and Bunny, his abilities make him a hero of greater use since he is part of the Toy Story, control and tank collections. 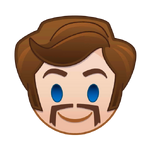 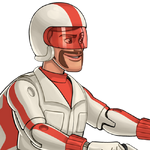