Not to be confused with the Duke of Weselton.

The Duke of Weselton
James Cagney[1]

The Duke of Bootleg
Weselton

Cops, his name being mispronounced

“It's Weaselton! Duke Weaselton! And I ain't talking, rabbit. And there ain't nothing you can do to make me.”
―Duke

Duke Weaselton is a supporting antagonist in Disney's 2016 animated feature film Zootopia. He is a smart-mouthed weasel who works as a two-bit crook.

The proclaimed "Duke of Bootleg", Duke's main source of income is the sale of pirated DVDs. He is a career criminal, though, and will just as quickly pickpockets or work for clientele, as his allegiance is to money before anything else.

Duke appears to be an affiliate of Zootopia's underworld, having known Mr. Big and Nick Wilde prior to the events of the film. He receives little respect, however, and uses his sharp-tongue as a defense mechanism. Nevertheless, he utilizes his size and swiftness to become an elusive criminal.

Tufts of fur can be seen missing from the pelt over his stomach, indicating scars. This suggests he's been stabbed or otherwise wounded in fights with other members of Zootopia's underworld.

Duke Weaselton is a small-time weasel crook with a big-time weasel mouth who tries to give Judy the slip during a police chase.[2]

As his name suggests, Weaselton is snide, conniving, and greedy, and is perfectly willing to betray others or engage in illegal activities for a few bucks more. However, compared to the ruthless Bellwether and morally ambiguous Lionheart, Weaselton's crimes are considerably more small-time and the worst action he commits are bootlegging and petty theft, making him more of a crook than a mastermind. He doesn't seem to engage in harmful activities, but stole toxic flowers to assist his employer's goals (as he was a hired hand, however, it's highly likely he was told nothing of the dangerous capabilities) solely because he was promised money, which he himself claims is "the one thing he can't refuse".

Weaselton is shown to have a dry and insulting sense of humor, referring to Judy Hopps in degrading terms throughout their chase such as "cottontail" and telling her to "have a donut" while kicking a large donut in her path as a reference towards the stereotypes of cops loving donuts. He carries himself in a prideful manner, arrogantly correcting Judy when she mispronounced his name. Like most criminals, Weaselton has a strong dislike towards police officers as he refused to say anything to Judy about the case she was working on and chastised Nick and Mr. Big simply for helping a cop.

It is also implied that he is cowardly, shown by the way he frantically and rather desperately ran away when he was being chased by Judy throughout Little Rodentia. This may not be true, however as he found the courage to continuously gloat towards the rabbit when he had the upper hand or seemingly lost her, but this trait only surfaces when he is certain he has the advantage in a situation. He also had the nerve to berate the fearsome Mr. Big for working with a cop, even going so far as to call him a "dirty rat", despite the fact that he was being intimidated with death at the time by the crime boss.

On Judy's second day of parking duty, a shop owner frantically tells Judy that someone just robbed his store. This gives Judy the opportunity to show her talent at being an actual police officer. Judy chases after the suspect, revealing himself later to be Duke Weaselton. Needing to escape, Duke heads into Little Rodentia, successfully getting away with his duffel bag. Nevertheless, Judy continues the chase. After a brief getaway, Judy manages to hurl Duke backward, making him lose his momentum. As Judy approaches him, Duke snarls "Have a donut, copper!" before kicking a donut sign towards her. Judy successfully dodges it, but it is now hurling towards a shrew who is crossing the road. Judy successfully saves the shrew from getting crushed, and uses the donut sign to capture Duke, and turning him in at the ZPD. Unfortunately, Chief Bogo isn't pleased with Judy, since he believed the items Duke stole were just moldy onions, helped little by the fact she caused a panic in Little Rodentia over the "onions". His irritation over the incident was so great that he blew up at her when Judy tried to correct him in the true nature of the stolen items as flower bulbs that her family uses on their farm.

Later in the film, Judy discovers that the flowers Duke stole are nicknamed "night howlers", and the flowers contain a toxin, that, when exposed to or consumed by mammals, turns them savage. Realizing that the person Duke stole them for was likely using them deliberately on predators, Judy and Nick confront Duke, who is selling bootlegged films to pedestrians. Judy and Nick demand answers for why he stole night howlers from the store. When he refuses to cooperate, the duo takes Duke to Tundratown's most feared crime boss, Mr. Big, to interrogate him. On the verge of getting iced, Duke fearfully admits he was planning to give the night howlers to a ram named Doug in exchange for the one thing he is unable to resist: money. He tells them of Doug's whereabouts and also warns them that Doug is the complete opposite of friendly; he's unfriendly.

Duke is last seen attending Gazelle's performance at the end of the film dancing, then noticing some animal's money sticking out of their back pocket, steals it out of their pocket, and then quietly dances away.

"And there ain't nothing you can do to make me."

Weaselton screaming in terror as Mr. Big's bodyguards attempt to ice him.

"I stole them Night Howlers so I could sell 'em! They offered me what I couldn't refuse...money."

Weaselton (along with Lionheart and Otterton) in the credits 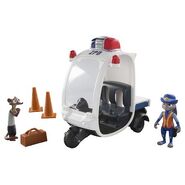