Agents of S.H.I.E.L.D.
Agent Carter
The Avengers: Earth's Mightiest Heroes
What If...?

Timothy "Dum Dum" Dugan was a member of Howling Commandos. He is portrayed by Neal McDonough.

Timothy Dugan and his fellow Regiment were captured by HYDRA. During his time as a prisoner, Dugan and the other soldiers were forced to build weapons for HYDRA. When Captain America learned that Bucky's regiment were captured; he assaulted one of HYDRA facilities. Dugan and his companions were freed by Rogers. While Rogers faced with Red Skull; Dugan, Jones, and Falsworth took a HYDRA tank causing a havoc during battle. The next day, after the successful battle, Rogers, Dugan, and the rest of the prisoners returned to the US military base.

Shortly after, Rogers offered Dugan and his companions to join a special elite commando unit led by the same Rogers. Dugan happily joined but with the condition that someone pay for his drinks. Dugan took part in every mission against HYDRA. During these missions he lost two friends, Bucky and Steve. With the war ended, Dugan, Gabe Jones, and Falsworth took a quiet drink in honor of Rogers.

After his stay in Russia, Dugan went to Washington, DC to meet with his old friend, Howard Stark. While two of them were in the pool, Dugan was amazed by the bikinis. He asked Howard if he invented them, Stark said no, it was the French.

Shortly after the demise of Captain America, Dugan, Jim Morita, and Peggy Carter went to Austria to arrest the last members of HYDRA in Austria. After capturing Reinhardt and his men, they confiscated various artifacts, including the Obelisk and an alien corpse.

As Roger Dooley promised Peggy Carter to let her join to Jack Thompson's team only if the Regiment 107th helped them, Carter called Dugan to ask this favor, which he accepted. Arriving in Belarus, Carter and Thompson meet with the Regiment 107th led by Dum Dum Dugan. Overnight, they all share war stories, then they ask Thompson how he became a war hero.

The next day, the team infiltrates the Red Room Academy. Here they find a film projector which shows movies with subliminal messages. They also found a little girl. In a moment of distraction, Dum Dum Dugan was stabbed by the little girl; and also he saw how that little girl killed Junior Juniper by a gunshot. When the little girl flees, Peggy asked him if he was okay, Dugan said he was okay but his vest not.

Later, they meet two scientists named Ivchenko and Nikola who were imprisoned in the Academy. The team freed the scientists before the Leviathan soldiers appears. Dugan offered Carter to join the Howling Commandos but she rejects the offer. Moments later, he gives Ivchenko the Bourbon that Peggy had given to him.

In "Meet Captain America", Dum Dum Dugan is briefly seen during an attack of Howling Commandos to a HYDRA base.

In "The Fall of Asgard", He was seen among the Commandos who died years ago in Niffleheim, tormenting Cap for leaving them. 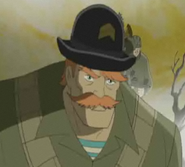