As the fourth animated feature in the Disney Animated Canon, the film is based upon the book written by Helen Aberson and illustrated by Harold Pearl for the prototype of a novelty toy ("Roll-a-Book"). The main character is Dumbo, a baby elephant who is laughed at for his big ears, but is, in fact, capable of flying by using his ears as wings. Throughout most of the film, his only true friend, aside from his mother, is a mouse named Timothy — a relationship parodying the stereotypical animosity between mice and elephants.

Today, the film is one of the most acclaimed animated movies of all time, often called the best in the medium. It is also known for being John Lasseter's favorite one, and it is among one of Walt Disney's favorites. It is also a favorite of film historian/critic Leonard Maltin and veteran animator Floyd Norman.

The film takes place in a circus in Florida, possibly in present-day 1941, and starts with a formation of storks delivering newborn babies to various circus animals. Mrs. Jumbo's baby is delivered to her belatedly by an exhausted stork, and the baby is well-received by the others - until the size of his ears are revealed after he sneezes. He, nicknamed "Dumbo" is teased by them. Mrs. Jumbo ignores them, however, until she is imprisoned as a "mad elephant" after trying to defend him from a crowd of antagonizing boys. A mouse named Timothy befriends him, and crafts a plan to make him a star in the circus.

After an emotional visit to Mrs. Jumbo's cell, Timothy tries to cheer up Dumbo, who could not stop crying. They settle down for a drink of water outside the clowns' tent. Unknown to them, the water has been accidentally spiked with champagne by the clowns, and they become inebriated and hallucinatory, seeing Pink Elephants sing and dance before their eyes.

Dumbo and Timothy awake the next morning—in a tree over 100 feet up, awoken by a gaggle of amused crows. Timothy guesses that Dumbo flew them to the top of the tree while they were drunk, an idea that the crows find hilarious. After Timothy tells them Dumbo's pitiful story, they decide to help Timothy teach Dumbo to fly. They convinced him that he can fly with the use of a "magic feather," and succeed in getting him to fly.

Dumbo shows up at his next clown performance with his magic feather, however, he loses it after leaping from the platform. Timothy admits to Dumbo that he can fly without it, and, barely avoiding death from the fall, he opens his ears and soars through the air, to the amazement of the audience. He is made a star of the circus and an international celebrity, and he and Mrs. Jumbo are finally reunited and given their own private coach on Casey Junior, the circus train, with the crows bidding them farewell.

Timothy Mouse was voiced by Edward Brophy, a character actor known for portraying gangsters who have no other known animation voice credits. The pompous matriarch of the elephants was voiced by Verna Felton, who would later play the Fairy Godmother from Cinderella and Flora from Sleeping Beauty. Other voice actors include the perennial Sterling Holloway in a cameo role as Mr. Stork, and Cliff Edwards, better previously known for voicing Jiminy Cricket, as Jim Crow, the leader of the crows.

To save costs, watercolor paint was used to render the backgrounds. Dumbo and Snow White are the only two classic Disney features to use the technique, which was regularly employed for the various Disney animated shorts. The other Disney features used oil paint and gouache. 2002's Lilo & Stitch, a simple, emotional story with influences from Dumbo, also makes use of watercolor backgrounds.

After its October 23 release, the film proved to be a financial success. It only cost $813,000 to produce, half the cost of Snow White and less than a third of the cost of Pinocchio. Dumbo eventually grossed $1.3 million during its original release; it and Snow White were the only two pre-1943 Disney features to turn a profit. The United States entered World War II in December 1941, reducing the box office draw of the film, which was nevertheless the most financially successful Disney film of the 1940s, thanks to a 1949 re-release.

The film won the 1941 Academy Award for Original Music Score, awarded to musical directors Frank Churchill and Oliver Wallace. Churchill and lyricist Ned Washington were nominated for the 1941 Academy Award for Best Song for Baby Mine, the song that plays during Dumbo's visit to Mrs. Jumbo's cell. The film also won Best Animation Design at the 1947 Cannes Film Festival.

The film's simplicity and charm have made it the favorite Disney one of many people, including film and animation historian Leonard Maltin. Of particular note is the "Pink Elephants on Parade" sequence, which depicts Dumbo and Timothy's drunken hallucinations. The sequence was the first venture into surrealism for a narrative Disney film, taking its cue from the experimental Fantasia. The sequence essentially breaks all the "rules" that the Disney animators had lived by for creating realistic animation over the previous decade: pink, polka-dot, and plaid elephants dance, sing, and morph into a number of various objects. The design of the sequence is highly stylized, and many of the artists who worked on it were the younger artists at the studio who joined the picket line in May 1941 and eventually would become the nucleus of United Productions of America, the most influential animation studio of the 1950s.

The crows in the film are in fact African-American caricatures; the leader crow, voiced by Caucasian actor Cliff Edwards, was named "Jim Crow", but temporarily renamed "Dandy Crow" in later years, since the 1950s, in an attempt to avoid controversy.[1] It was supposed to be a sarcastic mockery to the Jim Crow laws in the Southern USA, but no name is mentioned in the film. The other crows are voiced by African-American people, all members of the Hall Johnson Choir. Though the film is often criticized for the inclusion of the black crows, it is notable that they are the only truly sympathetic characters in the film outside of Dumbo, Mrs. Jumbo, and Timothy. They apologize for picking on Dumbo, and they are in fact the ones that help Timothy teach him to fly. It is also notable that they never mocked Dumbo for his big ears, and they are not based on the Stepin Fetchit stereotype common in the previous decade. Among the defenders of the crows are Floyd Norman,[2] Whoopi Goldberg, Leonard Maltin, Micheal Wilmington, Alex Wainer,[3][4] Neal Gabler, Eric Goldberg, John Canemaker, John Grant, and the chief animator of the characters Ward Kimball.

Review aggregator website Rotten Tomatoes reports that 98% of the critics gave the film a positive review based on 37 reviews.

In 2001, the "60th Anniversary Edition" VHS and DVD of Dumbo featured a sneak peek of Dumbo II, including new character designs and storyboards. Robert C. Ramirez (Joseph: King of Dreams) was to direct it, in which Dumbo and his circus friends navigated a large city after being left behind by their traveling circus. It also sought to explain what happened to Dumbo's father, Mr. Jumbo. Dumbo's circus friends included the chaotic twin bears, Claude and Lolly, the curious zebra Dot, the older, independent hippo Godfry, and the adventurous ostrich Penny. The animals were metaphors for the different stages of childhood. It was supposed to be set on the day immediately following the end of the first film. John Lasseter cancelled it soon after being named Chief Creative Officer of Walt Disney Animation Studios in 2006.

Dumbo appears in the first Kingdom Hearts game as a summon spell. When Sora is riding him, he is invulnerable and sprays water at the enemies (which counts as ice magic). When the time limit expires, he disappears. Sometimes Timothy helps him play the tuba in the Mickey Mouse Revue. 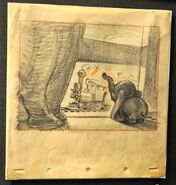