Dumbo II was the planned sequel to Dumbo that was directed by Robert C. Ramirez, director of the Dreamworks' film Joseph: King of Dreams. It was scheduled to be released in 2001 but was delayed for many years until production was cancelled by John Lasseter after he was named CEO of Walt Disney Animation Studios in early 2006. The trailer to the film can be found on the 2001 VHS and DVD release of the 60th Anniversary Edition of Dumbo.

Taking place specifically one day after the events of the first film, the story would have involved Dumbo, Timothy Q. Mouse and a host of other baby animals, each of whom represented a different stage of childhood, getting separated in New York City. While trying to find their way back, each character learned how to fix his or her own problems. Dumbo II also sought to explain what happened to Dumbo's father, Mr. Jumbo.

In addition to Dumbo, Casey Junior, Timothy and Mrs. Jumbo reappearing, Dumbo II was to have featured the following characters: 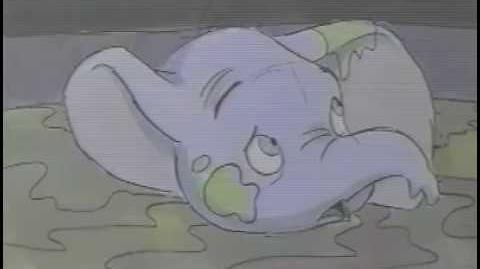 Dumbo II (2001) Storyboard Reel
A storyboard for a scene.