Adventures of the Gummi Bears
DuckTales (2017)

Still standing
Dunwyn Castle is a location in the television show Adventures of the Gummi Bears.

The castle is in the Kingdom of Dunwyn, and is ruled by the benevolent King Gregor.

The medieval castle is filled with hundreds of people who live and work insisde its stronghold walls. Among them are Princess Calla, the page Cavin, the squire Unwin, and the knight Sir Tuxford.

The castle is protected by the Gummi Glen Gummies; although most of its people are even unaware of their existence. The latest report of a Gummi Bear sighting is over 500 years old, which is why the mystical creatures have since been relegated to fairy tale lore.

Outside of the series, it is referenced in the 2017 DuckTales reboot, in the episode "From the Confidential Casefiles of Agent 22!"

The castle's design and moat-size slightly change over time, as evidenced here:

King Gregor in his throne room

Monarch's Day at the castle

Celebration in the throne room

Early storyboard for the pilot episode 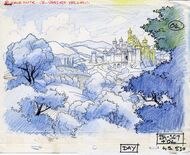 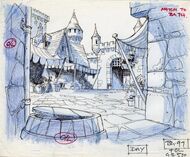 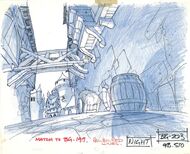 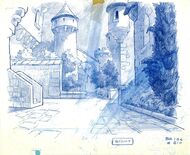 Retrieved from "https://disney.fandom.com/wiki/Dunwyn_Castle?oldid=4567666"
Community content is available under CC-BY-SA unless otherwise noted.