KaneCo, being interrupted by Texas

Blow torch, laser gun, his fists, mace
Dutch Gordy is the Burners' creative spark with a vast knowledge of technology. He drives Whiptail. He was voiced by Kel Mitchell.

An artist at heart, Dutch's creativity and tech knowledge made him a shoe-in as the Burners' go-to mechanic and his loyalty made him a steadfast teammate. While Dutch may value his alone time to pursue his artistic passions, he is always ready to upgrade the Burners' hot rods with one of his latest weapons or gadgetry, with the help of his robot assistant, R.O.T.H..

Dutch is the tallest of the Burners by far. He is African American and wears his hair in an afro style. He wears a purple and yellow t-shirt with his Burner logo on the chest, dark green pants, and brown shoes. When he's painting he often wears a purple respirator decorated with a monster-like face.

Dutch has a Swiss army weapon that can change into anything

Dutch spent most of his childhood in Detroit Deluxue creating art using spray paint but as he continued to do so, Kane Co. cracked down on him for violating the art ban. Wishing to continue his interest of art without endangering himself and his family, Dutch moved to a place with much less law than Detroit Deluxe, Motorcity. There, he met Mike Chilton and was offered a position in the Burners, which he accepted. 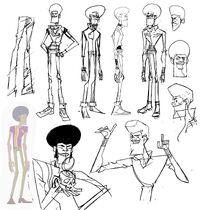 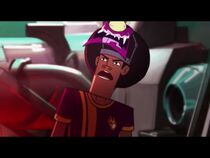 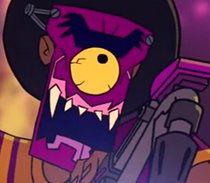 Retrieved from "https://disney.fandom.com/wiki/Dutch_Gordy?oldid=3275729"
Community content is available under CC-BY-SA unless otherwise noted.