Simone, Jasmine, and Tiana
Dwayne Douglas Johnson, also known and sometimes credited by his ring name "The Rock", is an American actor, voice actor, producer, and semi-retired professional wrestler. He played college football with the University of Miami Hurricanes and drafted with the Calgary Stampeders cut in the 1995 season. He later a became professional wrestler at WWE. He is widely known for playing Luke Hobbs in the Fast and Furious movies as well as Roadblock in G.I. Joe Retaliation.

For Disney, he has played Joe Kingman in the 2007 Disney family sports comedy film, The Game Plan and Jack Bruno in the 2009 Disney science-fiction/thriller film, Race to Witch Mountain. He also provided the voice of Maui in the 2016 Disney animated feature film, Moana and Frank in Jungle Cruise.

He also appeared as himself in Cory in the House, Hannah Montana, and Wizards of Waverly Place and as an air marshal in You Again. He was also mentioned in The Proud Family episode, "Smack Mania 6: Mongo Vs. Mama's Boy", the Liv & Maddie episodes "Sorta Sisters-a-Rooney" and "Voice-a-Rooney", and several episodes in That's So Raven and Raven's Home. 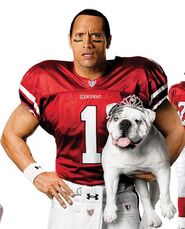 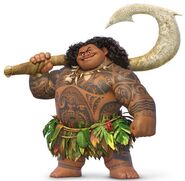 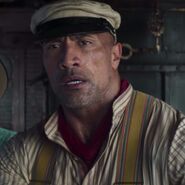 Frank
(Jungle Cruise)
Add a photo to this gallery

Dwayne Johnson at premiere of The Game Plan in September 2007.

Dwayne Johnson at premiere of Race to Witch Mountain in March 2009.

Dwayne Johnson poses during his Chinese Theatre handprint ceremony in May 2015.

Dwayne Johnson behind the scenes of Moana.

Dwayne Johnson and Auli'i Cravalho at premiere of Moana in November 2016.

Dwayne Johnson at his Hollywood Walk of Fame ceremony in December 2017.

Dwayne Johnson on the Magic Kingdom's Jungle Cruise for "research purposes" for the film adaptation in April 2018.

Dwayne Johnson attending the 2019 D23 Expo.
Add a photo to this gallery
Retrieved from "https://disney.fandom.com/wiki/Dwayne_Johnson?oldid=4053179"
Community content is available under CC-BY-SA unless otherwise noted.