To become the first dog on Mars

"Oh my dog! Oh my dog! Oh my dog!"
Dylan is the male protagonist of the animated series 101 Dalmatian Street. He is the eldest of Doug and Delilah's puppies. He is very pedantic and is the responsible one, compared to the adventurous personality of his stepsister Dolly. Both he and Dolly look after their younger puppy siblings while their parents are busy at work.

In an early pilot for 101 Dalmatian Street, Dylan's ears were both black, his head was a more block-like shape, and he looked like an adult. His head was then redesigned to have a more rounded shape to it, making him look younger, as well as having one black ear with white spots and one white ear with black spots.

According to the showmakers, the spot pattern on his right ear is similar to that of the constellation Canis Major (the Dog Star).

Dylan comes from Delilah's side of the family and is the more responsible one between Dolly and him. He is a major stickler for the rules, which in turn can make him come across as pedantic and a bit of a neat freak. While sometimes anxious, Dylan is very protective of his family, willing to charge into situations he finds scary if any of them are in danger.

He can be a worrier and is sometimes shown to overreact from his anxiety, becoming overly protective to those around him, which the other Dalmatians have dubbed as "Classic Dylan".

Dylan is a huge fan of anything space-related. He dreams about being the first dog on Mars, owns a "space helmet", moon rocks and a space telescope, imagines himself as a sort of space marine while doing the household chores, and gets excited when he mistakes a garden gnome for a Martian.

Dylan also loves paleontology, collecting fossils and having a plush Diplodocus which he calls "Dippy". Dylan is also a fan of the board game PoodleWolf, a canine version of human RPG board games such as Dungeons & Dragons.

Dylan has a talent for writing poems. This comes naturally to him. In "Poetry Scam", he was looking at the clouds with Dolly and telling her the words to his poem. It's unknown, though, if the poem is a recent one or not. Dylan wishes the others knew his poems, but he is nervous of crowds, so with the help of Dolly, Dylan's poem was finally revealed.

Dylan is one for cleanliness, with his wash time being precise, such as teeth brushing and sanitary scrubbing. In "Winter Funderland" he mentions that he has a molting journal.

His mother once said that she wants Dolly to be more like Dylan when she got disappointed in her stepdaughter. 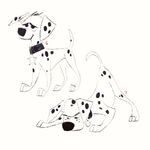 Dylan face to face with Dolly

Dylan and Dolly surrounded by their siblings

Dylan and Dolly blown away

"I am an invincible warrior of the Burning Night!"

Retrieved from "https://disney.fandom.com/wiki/Dylan?oldid=3796330"
Community content is available under CC-BY-SA unless otherwise noted.