Avengers Assemble
Marvel Disk Wars: The Avengers
The Falcon and The Winter Soldier

The EXO-7 Falcon is a set of mechanical jetpack wings worn by the character Sam Wilson aka Falcon and Riley. He acquired it to assist Captain America to stop HYDRA and as a member of the Avengers.

Wilson, arrived at the New Avengers Facility with new upgrades to his wings becoming an Avenger. He used them to arrive to the Avengers' roster becoming apart to the second incarnation of the Avengers.

A couple months later, Wilson used them when Ant-Man attempted to infiltrated the New Avengers facility.

A year after the defeat of Ultron, he used it to stop Crossbones. Later, used them during the Avengers Civil War.

After being revived by the Avengers, when they traveled back in time to collect the Infinity Stones and undo the Snap, Sam wore the EXO-7 Falcon suit and joined the Avengers and their allies in fighting an alternate Thanos and the Black Order. Sam used his suit to fly into the sky as he helped his allies during the battle until Thanos and his armies were defeated when Iron Man sacrificed himself. 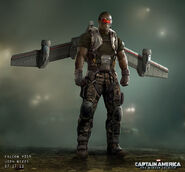 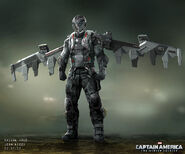