“Hear me and rejoice! You have had the privilege of being saved by the Great Titan. You may think this is suffering. No... it is salvation. The universal scales tip toward balance because of your sacrifice. Smile... for even in death, you have become children of Thanos.”
―Ebony Maw to the Asgardians[src]

Ebony Maw is a Marvel Comics supervillain who appeared as one of the antagonists of Avengers: Infinity War and Avengers: Endgame.

“In all the time I have served Thanos, I have never failed him.”
―Ebony Maw[src]

Ebony Maw is one of Thanos' feared members of the Black Order who has genius-level intellect, highly advanced psychic and telekinetic powers and specializes in persuasion.

His origins are mostly unknown, he was taken from a planet that Thanos decimated, probably at a young age. He is known to have never failed his adoptive father, to whom he is fanatically loyal.

Ebony Maw is sadistic, persistent, and fanatically loyal to Thanos, considering his goals to be honorable. He is more composed than the rest of Thanos' children, but he is also the most condescending, as he calls Iron Man a "chattering animal".

“Hear me and rejoice! You now have the privilege of dying at the hands of the Children of Thanos. Be grateful that your meaningless lives....”
―Ebony Maw confronting Iron Man and Doctor Strange before the latter interrupts him[src]

Ebony Maw enforces the will of Thanos, along with the other members of the Black Order. He helps him obtain the Tesseract and later battles Iron Man and Doctor Strange alongside Cull Obsidian in New York City, and finally succeeds in taking Strange captive. Later, Maw is seen in a flashback directing the Chitauri to massacre Gamora's people. In current time, Maw tortures Strange for the Time Stone. Unfortunately for Maw, Iron Man and his liege, Spider-Man, rescue Strange and Iron Man blasts apart a wall that results in Maw being sucked into the vacuum of space and killed, upon clever suggestion by Spider-Man. His frozen corpse is subsequently shown roaming outer space endlessly.

The original timeline of Ebony Maw does not appear in this film but the 2014-version of him does. He acts as one of the secondary antagonists and henchmen for the 2014-version of Thanos. He examined Nebula's mind when she time-traveled from 2023. He later fought the Avengers along with the time-traveled Black Order. He was seen among Thanos' army that turned to dust after Iron Man snapped his fingers. 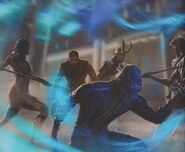 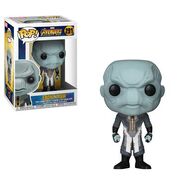