The Eboy is a minor character in Disney's 2018 animated feature film, Ralph Breaks the Internet. He is an Internet netizen that serves as the embodiment of the eBay notification system.

The Eboy (which is merely a nickname given by Ralph) is tasked with reminding eBay shoppers of their bids, purchases, and other business in relation to the site. Eboy is incredibly chipper and speaks with 1950s-esque idioms. He has a habit of mistaking the names of shoppers.

The Eboy is a Netizen with light blue skin, dark blue curly hair, teal eyes, and wears a bellhop uniform that consists of a black hat with a blue stripe and a blue letter "e" to show that he works for eBay, a blue long-sleeve shirt with white buttons, a white bow tie, white gloves, black shorts, white cuffs with buttons, and black dress shoes.

The Eboy first appears notifying Ralph and Vanellope that their bid on the Sugar Rush steering wheel would expire in 8 hours.

He later appears at BuzzzTube when Ralph and Yesss try to fix a problem, saying that their bid on the steering wheel would expire in 30 minutes.

After Yesss has fixed the problem, Eboy shows up again, saying that the steering wheel is ready to be purchased. Ralph then takes a ride to eBay with him. 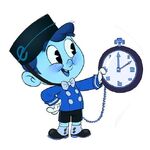 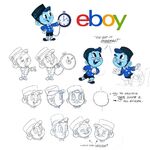 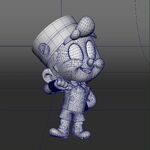 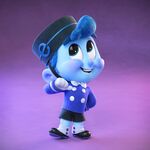