The Mother of All Monsters
Baby
Honey

Mother of all Monsters

The Realm of Monsters

Taking care of her children

The Olympian Gods, humans, laziness, heroes, her children not being frightening

Typhon (husband)
Numerous other monstrous children
Echidna is a recurring character of the Disney animated series, Hercules. She is the "Mother of All Monsters" of every horrifying creature to appear in the series. She is also the wife of the monstrous Titan, Typhon.

She is very motherly to her monstrous children. Echidna also is vicious and strict, attempting to destroy Athens with her entire family as Hades commands her to do so.

She cares for her children but is often tired and overworked.

Echidna appears to be enormous with brown and green scales and a body of a dragon for a hindpart (much like the centaurs). She has horns, cat-like eyes, sharp teeth, and large, dragon-like wings. She also contains a stinger at the end of her tail and mane around her neck, similar to a lion.

In the episode "Hercules and the Big Games" Hades visits Echidna and has her gather her entire family to attack Athens. Meanwhile, Hercules is winning every event and enjoying being a hero (or sports hero, as Phil calls it) – until Ares remembers, in a manner similar to anti-doping, that he is a demigod, and only mortals can compete; hence, half his points are taken off. But when Echidna and her family arrive, he puts aside popularity to save the day, with an assist from Ares and Athena, who are working together for once.

In the episode "Hercules and the Return of Typhon", Echidna, who was Typhon's mate, seeks revenge wreaking havoc on Athens, so to prove himself to his father, Hercules challenges her, but in doing so, inadvertently releases Typhon. When Zeus and Hercules reappeared, Typhon throttled his enemy and nearly succeeded when Hera once more intervened and threw a lightning bolt into his nostril, forcing all three monsters to flee.

In the episode "Hercules and the First Day of School", to prove himself as a hero, Hercules challenges Orthos the Bi-Clops, who is the son of Echidna. When they brush him aside as a nobody, they go to Prometheus Academy instead, vying to eat Adonis.

In the episode "Hercules and the Parents Weekend" Hercules puts all other things aside when his parents – along with Adonis' and Cassandra's parents are captured by Ladon, son of Echidna, for his dinner. 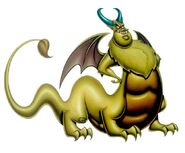