1999–present
Echo Kellum is an American film/TV actor, voice actor, and comedian. He is best known for his roles as Curtis Holt/Mr. Terrific in The CW drama series Arrow and its spin-off Legends of Tomorrow, and Hunter in NBC's Sean Saves the World.

For Disney, he voiced King Joaquín on the Disney Channel/Disney Junior animated series Elena of Avalor.

King Joaquin
(Elena of Avalor)
Add a photo to this gallery 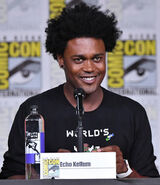 Echo Kellam speaks at the 2018 San Diego Comic Con.
Add a photo to this gallery
Retrieved from "https://disney.fandom.com/wiki/Echo_Kellum?oldid=4495157"
Community content is available under CC-BY-SA unless otherwise noted.