In 2009, Catmull was awarded the Gordon E. Sawyer award from the Academy of Motion Picture Arts and Sciences for his lifetime contributions to computer graphics used in the motion picture industry. Previously, in 2000, Catmull, with Rob Cook and Loren Carpenter, was awarded an Academy Award® of Merit for their work on the RenderMan® rendering system. He has also received two Scientific and Engineering Awards: in 1992 as part of the team for the development of the RenderMan system, and again in 1995 as part of a team for pioneering inventions in digital image compositing. Catmull also shared a Technical Achievement Award in 2005.

When Catmull was young, he wanted to become an animator for Disney. But in high school, he realized he wasn't good at drawing, so he began to focus on computers. He felt that the newly emerging field of computer graphics could be used to create a full-length animated film.[3]

After high school, Catmull attended the University of Utah and received bachelor degrees in physics and computer science. After a short stint at Boeing he came back to the University to get his doctoral degree. His focus was computer graphics and three-dimensional curves. During this time he came up with a number of contributions to the field. These included the study of bicubic patches and the development of the z-buffer, a way for a computer to track the depth of a three dimensional object. In this way the computer can determine which parts of the object are hidden from view by other objects and which should be visible. He also invented texture mapping, where a two dimensional image can be applied to the surface of a three dimensional object.[3] This allows the object to take on any look desired, such as steel, wood or cement. He used these technologies to create a short film: "A Computer Animated Hand," which came as a breakthrough to computer animation, and was added to the National Film Registry in December 2011. Catmull received his Ph.D. in 1974.

After receiving his Ph.D., Catmull took a programming job at a small CAD software company. But he knew this was not what he was interested in. Fortunately, a short while later, he was invited to become the head of the Computer Graphics Lab at the New York Institute of Technology (NYIT), which was founded by Alexander Schure. Schure wanted the lab devoted to researching computer animation. This was exactly what Catmull was looking for, so in November of 1974, he became Director of the lab. He brought with him a co-worker, Malcolm Blanchard, and then hired Alvy Ray Smith and David DiFrancesco, both from Xerox's Palo Alto Research Center (PARC).[4]

Catmull and his team eventually left 2D animation and started to concentrate on 3D computer graphics, moving into the field of motion picture production. By the end of the 70's, the Computer Graphics Lab had attracted the attention of George Lucas, who wanted to create his own computer group with Industrial Light & Magic. Lucas contacted Catmull in 1979 and offered him the role of Vice President at the computer graphics division at ILM.

At ILM Catmull helped develop digital image compositing technology used to combine multiple images in a convincing way. Catmull met John Lasseter in 1983, and hired him to be the first animator at ILM.

In 1986, Steve Jobs bought ILM's digital division and founded Pixar, where Catmull became Preseident and Chief Technical Officer, positions he retained until the Disney acquisition in 2006. At Pixar, he was the key developer of the RenderMan rendering system used in all Pixar films.

After Disney acquired Pixar in January 2006, Disney Chief Executive Bob Iger put Catmull and John Lasseter in charge of reinvigorating the Disney animation studios in Burbank. According to a Los Angeles Times article, part of this effort was to allow directors more creative control as collaborators on their projects and to give them the creative freedom to use traditional animation techniques — a reversal of former CEO Michael Eisner's decision that Disney would do only digital animation.

Ed Catmull behind the scenes of Toy Story. 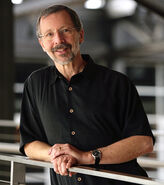 Ed Catmull at the premiere of Star Wars: The Force Awakens in December 2015.