Lily Delores
Edward Allen "Ed" Harris is an American actor, voice actor, producer, director, and screenwriter. He is well known for his roles in films such as The Abyss, Apollo 13, The Truman Show, Radio, and Appaloosa.

For Disney, he played Mitch Wilkinson in the National Treasure films. He also played E. Howard Hunt in Nixon, Brigadier General Francis X. "Frank" Hummel in the 1996 Hollywood Pictures film, The Rock, and provided the voice of Blade Ranger in Planes: Fire & Rescue. 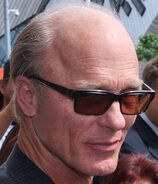 Ed Harris behind the scenes of Planes: Fire & Rescue.

Ed Harris at his Hollywood Walk of Fame ceremony in March 2015. 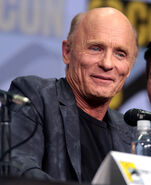 Ed Harris speaks at the 2018 San Diego Comic Con.
Add a photo to this gallery
Retrieved from "https://disney.fandom.com/wiki/Ed_Harris?oldid=3862819"
Community content is available under CC-BY-SA unless otherwise noted.