1982-present
Edward John "Eddie" Izzard is an English stand-up comedian, actor, voice actor, and writer. He is well known for his role in several films such as Tony P in the 1999 comedy Mystery Men and

For Disney, he voiced Nigel in the 2006 Disney animated feature film, The Wild, Reepicheep in the 2008 Disney film, The Chronicles of Narnia: Prince Caspian, and Miles Axlerod in the 2011 Disney/Pixar film, Cars 2. 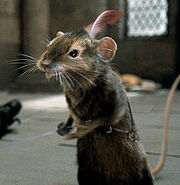 Miles Axlerod
(Cars 2)
Add a photo to this gallery 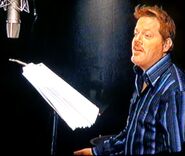 Eddie Izzard behind the scenes of The Wild.

Eddie Izzard visiting The Late Show with Stephen Colbert in July 2016.
Add a photo to this gallery
Retrieved from "https://disney.fandom.com/wiki/Eddie_Izzard?oldid=3931504"
Community content is available under CC-BY-SA unless otherwise noted.