Eddie Jones (portrayed by Alex Christian Jones) is the sweet guy of the group, that stands out in a crowd even though he wishes to remain anonymous. He is a member of the Wasabi Warriors. His mother wanted him to take dance classes, but he despises it. He only appears in the live-action series, Kickin' It.

He attends Bobby Wasabi because he loves the sense of achievement. If the Dojo closes, he will have no choice but to return to Mrs. King's Dance Academy. Eddie is the loner of the group. Unlike the others he doesn't fit into any other social circle, so it's very likely karate means a lot to him as a source of friends. He frequently refers to himself as a "playah" and yet, as is shown in Kung Fu Cop, he has very little success with girls.

Eddie seems to be afraid of embarrassment; he has been blackmailed by Truman, in who had a video of him dancing with and kissing one of the punching dummies. He apparently plays the cello but hates it. He is also a good rapper. He once had a job at Falafel Phil's as a rapping falafel ball. It is also shown in Swords and Magic and The Wrath of Swan that he is an Explorer Scout. After that he ran to his mommy and started crying, "I'm afraid, I'm afraid, I am so good!". 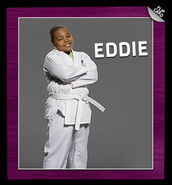 Add a photo to this gallery
Retrieved from "https://disney.fandom.com/wiki/Eddie_Jones?oldid=2817107"
Community content is available under CC-BY-SA unless otherwise noted.