2000–present
Eden Erica Espinosa is an American film and stage actress and singer. She is best known for her role as Elphaba in the Broadway musical, Wicked; initially as an understudy for Idina Menzel before taking over the role and performing it in Los Angeles and the national tour.

Eden Espinosa began her career as a Disneyland performer, being a caroler in the 1995 A Christmas Fantasy Parade and later playing Pocahontas and Ariel in Animazement.[1]

Other Disney projects she has been involved in since becoming more well known included hosting the nighttime firework spectacular, Magical, and voicing Orizaba in Elena of Avalor. She more notably voiced Cassandra in Tangled: Before Ever After and Tangled: The Series. She currently voices the Queen of Hearts in the Disney Junior animated series Alice's Wonderland Bakery.

Cassandra
(Tangled: Before Ever After and Tangled: The Series) 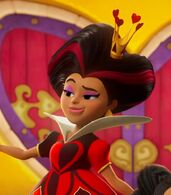 Eden Espinosa performs onstage during the Voices for the Voiceless: Stars for Foster Kids event in June 2015.

Eden Espinosa is interviewed on an episode of Broadwaysted. To listen to Eden in this episode, follow the link here.