Start a Wiki
Eden Hall Academy is a fictional, prestigious prep school in Minneapolis, Minnesota. The four-year academy is featured in the film D3: The Mighty Ducks as a private school with tuition with scholarships awarded to deserving students. Gordon Bombay went to school here. The academy has on-campus dormitories that students reside in. The headmaster of the academy is Dean Buckley, former Biology teacher when Gordon Bombay attended. Mostly the Ducks who live in Minnesota commute to Eden Hall Academy and live at home. Julie, Russ, Dwayne and Ken all lived in the dorms of Eden Hall. Mostly Portman was supposed go to the Academy, he staying in Chicago when Bombay wasn't going to coach. But Bombay convinced him to attend Eden Hall Academy and pull some strings with the headmaster Dean Buckley to let him attend.

Eden Hall competes in many sports, as they have both a Varsity and Jr. Varsity hockey team. 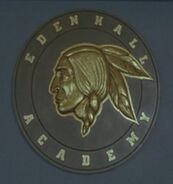 Trophy hall
Add a photo to this gallery

Retrieved from "https://disney.fandom.com/wiki/Eden_Hall_Academy?oldid=4000080"
Community content is available under CC-BY-SA unless otherwise noted.