Eden Rebecca Sher is an American actress and voice actress, who is best known for her television role as Sue Heck in the ABC sitcom The Middle from 2009 to 2018.

For Disney, she voiced Star Butterfly in the Disney Channel animated series Star vs. the Forces of Evil. She also played Lucy in the Sonny with a Chance episode "Three's Not Company" and Billie in the Pair of Kings episode "The Oogli Stick".

In addition, she appeared in a promo for The Muppets in August 2015 with Miss Piggy in which she kept tripping over and knocks down equipment on the show's set.

Star Butterfly
(Star vs. the Forces of Evil)

Lucy
(Sonny with a Chance) 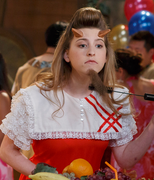 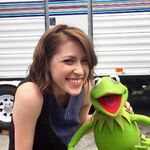 Eden Sher with Kermit the Frog.