Virginia Eliza Clemm Poe
Edgar Allan Poe was an American author, poet, editor, and literary critic considered part of the American Romantic Movement. Even though he never existed during the time of movies or were any of his works adapted into films by Disney, (although his most famous work The Raven was mentioned in It's Tough to Be a Bird, because of the Raven with the quotes: "Once Upon a Midnight Deary, While I Poundered Weak and Weary" and "Quoth the Raven "Nevermore") a sentient wax figure of him appeared in the Gravity Falls episode "Headhunters". He also appeared in It's Tough to Be a Bird for the raven for his most famous work, The Raven. Poe De Spell is named after Edgar, to be a reference to him and his poem, The Raven. In the parks, The Raven was referenced in Journey Into Imagination's Tales of Terror scene and served as the inspiration for the Raven character in The Haunted Mansion, with early plans involving giving it a voice that would occasionally cry out "Nevermore". 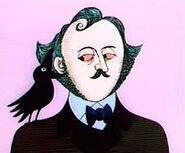