Disney Wiki
Register
Don't have an account?
Sign In
Advertisement
in: People, A Bug's Life, The Little Mermaid,
and 38 more
English

1976–present
Edith Marie "Edie" McClurg is an American actress, voice actress, and comedian, who has performed voice acting for many Disney productions. She was going to voice Clarabelle Cow in the cancelled short film, Mickey Columbus. She contributed the voice of Fran the squirrel on Higglytown Heroes, the nurse of Ant Island and member of the council in the 1998 Disney/Pixar animated film, A Bug's Life, and Minny in the 2006 Disney/Pixar animated film, Cars and its 2011 sequel, Cars 2. She is also the voice of Carlotta in The Little Mermaid and The Little Mermaid II: Return to the Sea and voiced the storytelling Dragon in the Nightmare Ned video game. She is the voice of Barsa in the Disney dub of Kiki's Delivery Service and the voice of Bea's mother and Mrs. Goldfishberg in Fish Hooks. In addition, she played Miranda Hoggendobber in Murder She Purred: A Mrs. Murphy Mystery and Martha in Flubber.

McClurg also appeared in an episode of the TV sitcom The Golden Girls, playing a nurse from Shady Pines that Sophia hated to see again, but then became friends with her. McClurg performed in an episode of Hannah Montana as Cindy Merriweather. She contributed various voices in TaleSpin, Darkwing Duck, Home on the Range, and Mickey's Twice Upon a Christmas, as well as the voice of Wanda Jean Schmeltzer in the Goof Troop episode "Meanwhile, Back at the Ramp", Martha George in Flubber (in one of her many collaborations with writer John Hughes), Gram Gram in Air Bud: Spikes Back, the Tooth Fairy, Bertha, Giantess, and Hunchback in American Dragon: Jake Long, June in Pair of Kings, Mary in Wreck-It Ralph, Gerda in Frozen, and Trudi Traveler in Wander Over Yonder.

Edie McClurg attending the grand opening of Cars Land at the Disneyland Resort in June 2012.

Edie McClurg at the premiere of Wreck-it Ralph in October 2012.

Edie McClurg at the premiere of Frozen in November 2013. 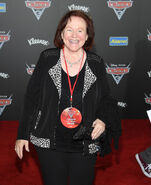 Edie McClurg at the premiere of Cars 3 in June 2017.
Polski
Community content is available under CC-BY-SA unless otherwise noted.
Advertisement