Matthew, Liza, Kate, and Charles
Edward Asner, commonly known as Ed Asner, is an American actor, voice actor, and former president of the Screen Actors Guild, who is best known for his role as Lou Grant on the CBS sitcom The Mary Tyler Moore Show, and its dramatic spin-off series of the same name both shows of which he won an Emmy award for his performances. 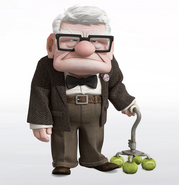 Napoleon
(W.I.T.C.H.)
Add a photo to this gallery

Pete Docter and Bob Peterson supervising Ed Asner's recording session in Up.
Add a photo to this gallery

Retrieved from "https://disney.fandom.com/wiki/Edward_Asner?oldid=3829468"
Community content is available under CC-BY-SA unless otherwise noted.