6
Edward James Olmos is an American actor and director (with dual citizenship). He is known for his roles as William Adama in Battlestar Galactica and Marty Castillo in Miami Vice. He also voiced Chief Tannabok in the 2000 DreamWorks animated film, The Road to El Dorado.

For Disney, he voiced El Diablo in the 2008 Disney film, Beverly Hills Chihuahua, Mito in the English dub of Nausicaa of the Valley of the Wind, Randy in Bless This Mess, Robert Gonzales in Agents of S.H.I.E.L.D., and Chicharrón in Disney/Pixar's Coco. He was also mentioned in The Muppets episode "Swine Song".

Edward James Olmos poses in the press room at the 73rd Annual Peabody Awards in May 2014.

Edward James Olmos at premiere of Coco in Novmeber 2017. 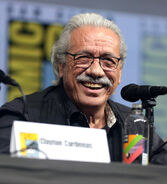 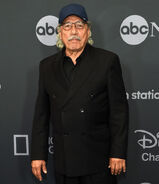 Edward James Olmos speaks at the PBS segment of the 2019 Summer TCA Tour.
Community content is available under CC-BY-SA unless otherwise noted.