The Living Planet
Angel
The God

To destroy the universe (failed)

“My name is Ego, and I am your dad Peter!”
―Ego the Living Planet to Star-Lord

Ego the Living Planet is a character from Marvel Comics and the main antagonist of the film Guardians of the Galaxy Vol. 2. Like his name suggests, he is a sentient planet with terraforming abilities.

Ego the Living Planet was created by Stan Lee and Jack Kirby.

Ego debuted in the episode "All About Ego". Like the comics, he is a living planet that has the ability to control its own surface. He can create cannon, fissures and many challenging problems for any hero on his surface. But in the center of Ego is his true form - a miniature version of Ego who is the heart of the planet. He has a big mouth and acts similar to the Red Hulk. Later on, he returns as an ally to the Hulks, and allows them to pilot his planet body in "Planet Monster" during the battle against the Supreme Intelligence and Kree.

Ego does not make an appearance, but he is alluded to when Peter Jason Quill ponders his father's identity. When Quill holds the Infinity Stone enclosed inside the Orb, he was miraculously able to survive its power; a later scan performed by the Nova Corps revealed that this was because of his half-human heritage from his father's side. When Yondu Udonta and the Ravagers are leaving, it is revealed that Ego hired them to bring Peter to him years ago, but instead the Ravagers kept Peter as one of their own.

In the beginning of the film, Ego came to Earth in 1980 and started his relationship with Meredith Quill. Soon, Ego had Quill with her, but would later leave Earth due to Meredith's cancer.

In 2014, the Guardians of the Galaxy are escaping the Sovereigns. When Ayesha sends a fleet of drones and attacks the Milano, the spaceship crash landed on Berhert, where Ego, accompanied by his ward Mantis, shows up and reunites with his son. After explaining about his past to the Guardians, Ego encourages them to visit his home planet so that Quill can learn more about his lineage. Out of the Guardians, Quill, Gamora and Drax join him, while Rocket and baby Groot stay behind to watch over their captive, Nebula.

On Ego's planet, Ego explains that he is a Celestial, a living planet that can generate and control anything made from him, and the body seen before the Guardians is but an avatar he can use to freely move and communicate with others. Training Quill, Ego helps his son unlock his Celestial abilities. However, Ego's true plot soon emerges - Ego wants Quill to contribute his Celestial power so that he can terraform the various planets he has visited, transforming them into extensions of Ego. Ego also reveals that he caused Meredith's cancer from fear that his love for her would get in the way of his plans. Quill turns against his father after the revelations, destroying Ego's avatar with his fellow Guardians. However, the Guardians have to also destroy Ego's core to stop the Celestial permanently; at the same time, they find themselves fighting Ayesha and her Sovereign Flying Fleet descending on Ego's planet.

Mantis uses her abilities against Ego to make him go to sleep, buying time for the Guardians to place a bomb inside Ego's core. However, Mantis is stricken unconscious, reawakening Ego who quickly subdues all the Guardians and continues his expansion across planets. From Yondu's encouragement and care for his friends, Quill unlocks his full Celestial power and battles Ego to allow the other Guardians to escape. Meanwhile, Groot places the bomb inside Ego's form, which Ego senses and pleads Quill by claiming that Ego's death means the loss of Quill's powers. To Ego's shock, Quill accepts the inevitable and lets the bomb detonate, destroying Ego's core and his human avatar simultaneously. With Ego's death, his planetary body collapses. 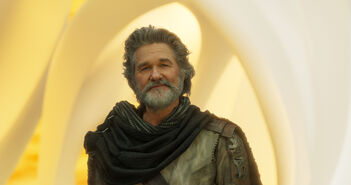 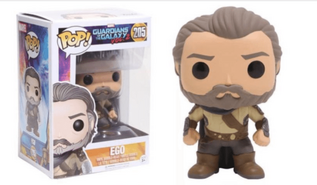 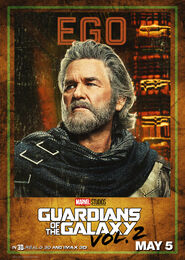 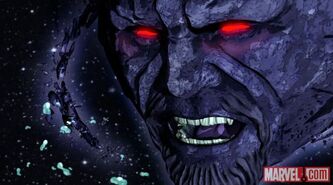 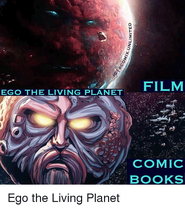 Ego's Planet Form from the movie and comic 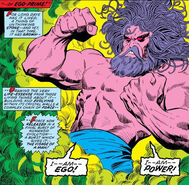 Ego's human form from the comics. 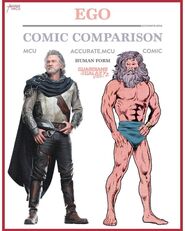 Human form comparison.
Add a photo to this gallery

Retrieved from "https://disney.fandom.com/wiki/Ego_the_Living_Planet?oldid=2697834"
Community content is available under CC-BY-SA unless otherwise noted.