El Capitan Theatre is a fully restored movie palace at 6838 Hollywood Boulevard in Hollywood, CA. It is owned by Pacific Theatres and operated by The Walt Disney Company. It serves as the venue for many Walt Disney Pictures movie premieres. In 2014 the VIP dressing room was renamed the Sherman Brothers' Dressing Room featuring photographs and other memorabilia of the legendary songwriters on the walls. It is still used for VIPs.

The theatre also appears in the film's sequel.

The theatre was featured in the third installment of the Disney Infinity series, as part of the Toy Box Hub. When players entered the Theatre, they were able to play and download Toy Boxes, view upcoming Toy Boxes, and watch new episodes of Toy Box TV. Furniture, walls, and flooring from the theatre are also unlocked for use in the player's INterior. After the cancellation of the series, players can still enter the theatre lobby, but are not able to view any previous content. 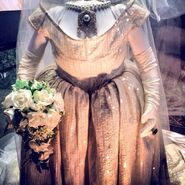 Jim Cummings and Anika Noni Rose (aka "Princess Tiana") from The Princess in the Sherman Brothers' Dressing Room @ the El Capitan Theatre.