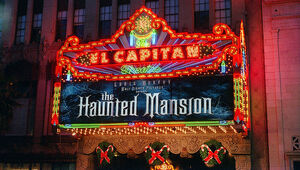 The television program Jimmy Kimmel Live!, which airs on ABC, broadcasts from a TV studio next door to the theater.

Retrieved from "https://disney.fandom.com/wiki/El_Capitan_Theatre?oldid=601719"
Community content is available under CC-BY-SA unless otherwise noted.