Not to be confused with Diablo, Maleficent's pet raven in Sleeping Beauty.

El Diablo is a Doberman Pinscher. He fights at the dogfights at the behest of his owner, Vasquez. Prior to the film, he had a run-in with Delgado, a police dog, where Diablo injured Delgado's partner, resulting in Delgado losing his sense of smell and being thrown out of the police force. In the film, Vasquez sets him against Chloe in the dogfighting ring. Diablo is about to kill her when Delgado saves her. Vasquez fits Diablo with a GPS and sends him after them. Diablo pursues them, eventually capturing Chloe and bringing her to Vasquez. However, Papi, Chloe's lover, shows up and helps Chloe escape, although he gets captured. When Chloe frees him, Diablo corners Papi while Vasquez tries to catch Chloe. When Chloe discovers her bark and scares Vasquez away, she then attacks Diablo, although he throws her aside, knocking her unconscious. He is pinned by Delgado, although he manages to slip away.

While it isn't shown in the film, Delgado, now a police dog again, apparently manages to track down and capture Diablo, according to Papi's brief description at the end of the film about what happened to some of the characters afterward. Diablo is sent to the pound, where "he was adopted by a rich lady with a passion for fashion."

Diablo and Chloe in the dogfighting ring 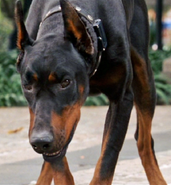 "It's time to pay the piper, perra pequeña. Where were we?"

El Diablo's defeat
Add a photo to this gallery

Retrieved from "https://disney.fandom.com/wiki/El_Diablo?oldid=4545553"
Community content is available under CC-BY-SA unless otherwise noted.