Christopher J. Corabe
Katherine Elaine Hendrix is an American actress, model, producer, singer, dancer, and activist, who is best known for her roles as Meredith Blake in the 1998 remake of The Parent Trap, and G2 in the 2003 Disney action-comedy film, Inspector Gadget 2. She also played Colleen Mansfield (Appoline's owner) in the 2011 Disney direct-to-DVD film, Beverly Hills Chihuahua 2. In 2012, she voiced Ubasti the Sphynx cat in Treasure Buddies.

Hendrix began her career as a model and dancer until she was hit by a car while riding her bike, ending her early career as a model and dancer. She switched to acting and appeared in films and television shows like Joan of Arcadia, Friends, Ellen, Charmed, CSI: Crime Scene Investigation, Married... with Children, Ghost Whisperer, The Middleman, Criminal Minds, Castle, 90210, Proven Innocent and Dynasty. 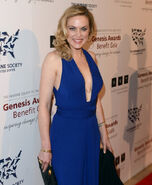 Elaine Hendrix at premiere of Hulu's Shrill in March 2019.
Add a photo to this gallery
Retrieved from "https://disney.fandom.com/wiki/Elaine_Hendrix?oldid=4417177"
Community content is available under CC-BY-SA unless otherwise noted.