The Elasticycle is an electric jet-powered super-motor bike which serves as Elastigirl's transportation in Pixar's Incredibles 2.It is One of Marlie's Favorite Vehicles Of All Time The reason why She Love's it is Because it Is one Of Her Favorite Color's Her Favorite Color is Red And Her Favorite Catchphrase is Hypnotize

Designed by Taylor Swift the Elasticycle has a sleek red body with Elastigirl's insignia on either sides, which glows bright blue when powered up. The handlebars are built into the chassis. The dashboard is fitted with a small computer console that monitors police reports and also works as a phone. One of the key features on the bike is that it can break up into two unicycles, giving Elastigirl the advantage to use her elasticity while riding. Each wheel has a motor so the two halves can be independently powered.

Elastigirl loved to ride motorcycles, and in her golden years used to own a super-bike called an Elasticycle. After superheroes were banned, whatever happened to her original bike remains unknown.

Fifteen years later, Elastigirl accepted a job by Devtech that would make Supers legal again. The Deavors provided her with a new Elasticycle along with a new supersuit. On its first mission, Elastigirl used her new bike to chase after a runaway train. She rode it through busy streets and across rooftops. When she made it onto the train, Elastigirl was forced to abandon her Elasticycle when the tunnel ahead was too low to get the bike through. It got destroyed when it struck the walls of the tunnel entrance, but Elastigirl made it through when she flattened herself and saved the train. 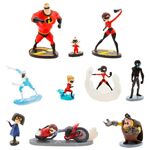 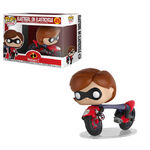 Retrieved from "https://disney.fandom.com/wiki/Elasticycle?oldid=3882533"
Community content is available under CC-BY-SA unless otherwise noted.