The Electrical Water Pageant is a night-time water parade at Walt Disney World performed on Bay Lake that opened with the resort on October 25, 1971. Though it has changed somewhat since then, it remains one of the few original opening year shows to still be running there.

Going around the lagoon every night, barring bad weather, it is one of the longest running Disney shows and the predecessor of the Main Street Electrical Parade.

In addition to the 14 floats, its opening night included fireworks and pyrotechnics launched from the 14 floats and an additional float behind them. All of this was filmed by Walt Disney Productions and edited down for inclusion into The Wonderful World of Disney episode: "The Grand Opening of Walt Disney World", which aired on NBC on October 29, 1971. The Paul Beaver version of Jean-Jacques Perrey and Gershon Kingsley's "Baroque Hoedown", created specially for the Electrical Water Pageant, was used from 1971, until 1977. The original Disneyland Main Street Electrical Parade used the same soundtrack from 1972, until 1974. In 1977, the premieres of the updated version of the parade and new (but similar) Walt Disney World Main Street Electrical Parade used a new version of "Baroque Hoedown" updated by Don Dorsey.

The original lineup of the floats were:

While the 1971 version of "Baroque Hoedown" would play along with the Electrical Water Pageant through 1976, some of the floats were repositioned and others completely changed in 1972; and remained that way through 1976.

With the return of the Disneyland Main Street Electrical Parade in an updated form along with the brand new Walt Disney World version, a new version of Jean-Jacques Perrey and Gershon Kingsley's "Baroque Hoedown" was created in 1977 to be used with both parades respectively featuring an updated rendition of it recorded by Don Dorsey. To help distinguish the Electrical Water Pageant from the Main Street Electrical Parade, the original Kingsley-Perrey version of "Baroque Hoedown" was dropped and a new version using various musical selections was created for both the opening and closing of the Electrical Water Pageant as well as each creature depicted in it. Some of the original 1971 floats were saved and/or rearranged, while others were once again completely changed. The main themes for this version were synthesized arrangements from George Friedrich Handel's Water Music.

From October 1, 1981-October 1, 1982, in honor of Walt Disney World's 10th anniversary, the Patriotic Finale music was replaced with the Tencennial theme song.

The Electrical Water Pageant that guests see today, consists of the same floats in the same formation dating back to 1977. The only difference is in 1996, in honor of Walt Disney World's 25th anniversary, a new musical score was created for both the opening and closing as well as each creature depicted in it.

The 1996 to present day lineup of floats and music are: 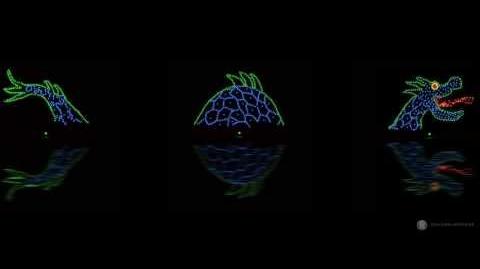 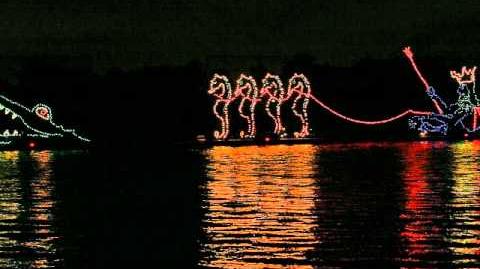 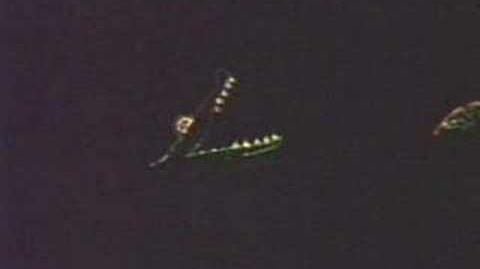 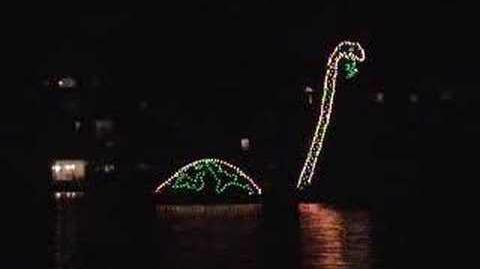 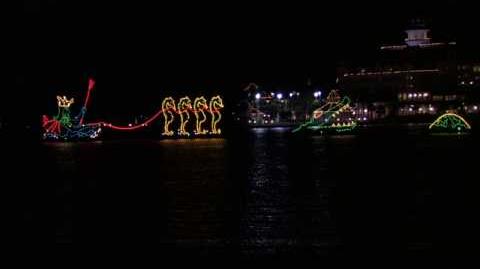 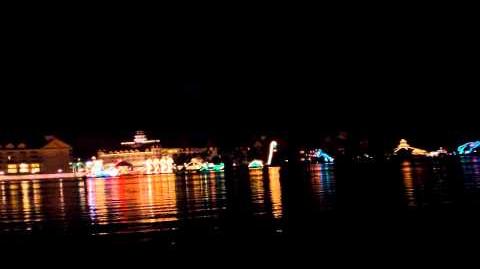