“The battle has begun, Matthew. There's nothing we can do but fight.”
―Elektra to Matt Murdock

Elektra Natchios is a character from Marvel Comics who appears in Daredevil, played by Élodie Yung. She is an assassin who was sent to kill Daredevil. However, she fell in love with him, and couldn't bring herself to kill him. She now acts an anti-heroic ally of Daredevil, helping him defeat his enemies. She is an expert martial artist and she uses a pair of sais as weapons.

Elektra is shown to be very confident, once telling Matt that every man she's ever met has wanted to sleep with her. She also has no qualms with breaking the law, often destroying property, hacking, and breaking into places. She also doesn't share Matt's moral belief that they shouldn't kill.

She was briefly mentioned by Foggy Nelson as someone Matt dated back in college. She returns to New York City to have Matt help her with taking down the Hand. She was raised by Stick as a young girl and trained in martial arts until the Chaste deemed her too dangerous. Stick has her adopted by a Greek Ambassador to keep her safe. When she's older, she's sent by Stick to manipulate Matt into coming to his side again, but Elektra ends up falling in love with Matt. They break up when Elektra takes it too far by capturing the man who murdered Matt's father and allowing Matt the opportunity to kill him, which Matt refuses. Matt tries to convince her that she doesn't belong in Stick's war and can be her own person, and they almost get back together before she kills a Hand ninja. At the airport, she is attacked by one of Stick's assassins and tracks him down to finish him, but Matt stops the two from fighting before the Hand arrive and kidnaps Stick. When they go to rescue him, they discover she was destined to be the Hand leader known as "The Black Sky", but Matt convinces her she can choose her own path and they escape. They confront Nobu and his ninjas on the rooftop in a final showdown, where Elektra sacrifices her life to save Matt. Her grave is dug out by the Hand and her body is placed in a large container as single heartbeat is then heard indicating she will return. 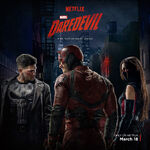 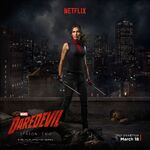 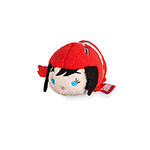