Fantasmic!
Parade of the Stars
Festival of Fantasy Parade

Fish in bubbles
Elephanchine is a character from Disney's 1940 animated feature Fantasia. She and the elephant ballerinas represent the dusk during the middle part when Hyacinth Hippo takes a nap in the Dance of the Hours segment.

Elephanchine first appears along with her elephant troupe, while Hyacinth Hippo is sleeping. She and the other elephants dance and blow some bubbles along with her who notices a fish in one of them; after a while, a huge wind blows them away. Elephanchine and the other elephants appear in the finale when the Alligators chase the Hippos, Ostriches, and the Elephants themselves around and fall in love with each other. 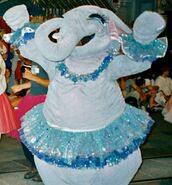