1989-present
Elijah Jordan Wood is an American actor, voice actor, producer, and DJ. He is best known for his role as Frodo Baggins in The Lord of the Rings film trilogy and its prequel The Hobbit: An Unexpected Journey. He also voiced Mumble the Emperor penguin in Happy Feet and its 2011 sequel, Wirt in the animated television miniseries Over the Garden Wall, provided various voices for the stop-motion sketch comedy series Robot Chicken, and voiced the titular character in The Legend of Spyro video game trilogy.

For Disney, he played Pinocchio in the 1990 edition of You and Your... Five Senses, Huckleberry "Huck" Finn in the 1993 adventure film, The Adventures of Huck Finn, and voiced Beck in the Disney XD animated series Tron: Uprising. He also portrayed the Artful Dodger in the 1997 television film adaptation of Oliver Twist as well as the speaking voice of Tom Thumb in The Adventures of Tom Thumb and Thumbelina and Willard Young in the 1991 Touchstone Pictures film, Paradise. He voiced Jace Rucklin in Disney XD's Star Wars Resistance.

Pinocchio
(You and Your... Five Senses)

Tom Thumb
(The Adventures of Tom Thumb and Thumbelina) 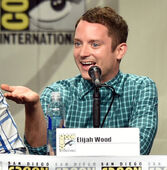 Elijah Wood attending the 2019 Tribeca Film Fest.
Add a photo to this gallery
Retrieved from "https://disney.fandom.com/wiki/Elijah_Wood?oldid=4125590"
Community content is available under CC-BY-SA unless otherwise noted.