2006-present
Elissa Knight is an American voice actress and an employee at Pixar Animation Studios.

Knight has been working as an assistant at Pixar working on films, such as Cars, Ratatouille, and WALL-E. Knight voices animated characters as necessary, occasionally recording scratch tracks for use, until a big-name actor can record their dialogue.

She is best known as the voice of EVE in WALL-E. 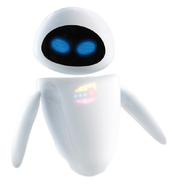 EVE
(WALL-E)
Add a photo to this gallery
Retrieved from "https://disney.fandom.com/wiki/Elissa_Knight?oldid=4013176"
Community content is available under CC-BY-SA unless otherwise noted.