Felix and Magnus
Elizabeth Irene Mitchell, better known as Elizabeth Banks, is an American actress, producer, and director, who did the voice of Grulinda Boubenweir in the Phineas and Ferb episode "Imperfect Storm". She also played Janet Cantrell in the 2006 biographical sports drama Invincible and Frankie Davis in the DreamWorks/Touchstone Pictures film, People Like Us. Additionally, she made a cameo appearance as herself in the pilot episode of The Muppets. She was an executive producer of the 2009 Touchstone Pictures film, Surrogates.

Outside of Disney, Banks has appeared as Gail Abernathy-McKadden in the Pitch Perfect trilogy, the voice of Wyldstyle/Lucy in The LEGO Movie franchise, and as Effie Trinket in The Hunger Games franchise. Her other film credits include Surrender Dorothy, Wet Hot American Summer, Spider-Man, Seabiscuit, The 40-Year-Old Virgin, Slither, The Next Three Days, Man on a Ledge, What to Expect When You're Expecting, Love & Mercy, Magic Mike XXL, Power Rangers, Brightburn, and Charlie's Angels.

She also appeared on television shows, like 30 Rock, Scrubs, Modern Family, Sex in the City, American Dad!, and she hosts a revival of the 1980s game show, Press Your Luck on ABC.

Banks made her directorial film debut with Pitch Perfect 2 (2015), which led to her making the 2019 reboot of Charlie's Angels. 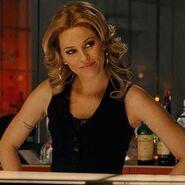 Elizabeth Banks poses for a portrait at the 2014 Sundance Film Fest.

Elizabeth Banks and Jamie Chung at premiere of Resident Advisors in March 2015.

Elizabeth Banks speaks at the Shrill panel at the 2019 Winter TCA Tour.
Community content is available under CC-BY-SA unless otherwise noted.
Advertisement