Tyson Daily Salomon, Hunter Daily
Elizabeth Ann Guttman, better known by her stage name E.G. Daily, is an American comedian, actress, voice actress, and singer who is best known for her voice roles as Tommy Pickles in the Nickelodeon animated series Rugrats, from 1991 to 2004 and its spin-off All Grown Up!, from 2003 to 2008, Buttercup in the Cartoon Network animated series The Powerpuff Girls, from 1998 to 2005, and as the voice of Babe in the movie Babe: Pig in the City.

For Disney, she voiced Louie in Quack Pack, the screaming voice of the Photo Studio Girl in A Goofy Movie, additional voices in Recess, Bud in Aladdin, Bagheera in Season 1 of Jungle Cubs, the singing voice of Beary Barrington in The Country Bears, Elastigirl in the 2004 video game The Incredibles (serving as the sound double for Holly Hunter), and Mockingbird in The Avengers: Earth's Mightiest Heroes.

Daily shared a role with her Quack Pack co-star, Pamela Adlon, voicing the title role of Pajama Sam in the computer game franchise of the same name by Humongous Entertainment. 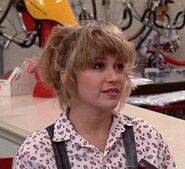