2001-present
Mary Elle Fanning is an American actress. She is known for her roles as Sweetie Pie Thomas in the 2005 adaptation of Because of Winn Dixie, Alice Dainard from the 2011 sci-fi drama Super 8, and Lily Miska in the 2011 comedy We Bought A Zoo. She is the younger sister of Dakota Fanning.

For Disney, she voiced Mei Kusakabe in My Neighbor Totoro. She played Princess Aurora in the 2014 Disney film, Maleficent, Tracy Belle in the CBS/ABC TV show, Criminal Minds, and Kiki George in the ABC TV show, Dirty Sexy Money.

Aurora
Maleficent
Maleficent: Mistress of Evil
Add a photo to this gallery

Elle (right) with her sister, Dakota (left) interview from My Neighbor Totoro in 2005 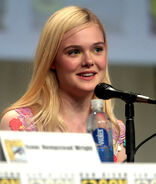 Elle Fanning with Angelina Jolie promoting promoting Maleficent: Mistress of All Evil.
Add a photo to this gallery
Retrieved from "https://disney.fandom.com/wiki/Elle_Fanning?oldid=3700749"
Community content is available under CC-BY-SA unless otherwise noted.