Disney Wiki
Register
Don't have an account?
Sign In
Advertisement
in: Characters, Dog with a Blog characters, Disney characters,
and 13 more

Stan (dog)
Ellen Jennings is the very involved, very energetic, and loving mother of the Jennings/James family. Her catchphrase is "Good one, Ellen".

Ellen is Avery's mother and Chloe and Tyler's stepmother. She doesn't like dogs, sometimes does not like cats, and makes it known that she doesn't like Stan as he tends to chew on her items. She has tried to take care of a parrot in the Episode "The Parrot Trap" but at the end of the episode, she and Stan get along. Her nickname is "Smellen" due to the medley of horrific odors in her car.

Bennett is Ellen's husband. While he is a child psychologist, Ellen thinks he got his degree on the Internet, and thinks he got it by lying, because his "techniques" are more like lies. When they moved into the same house, it seemed as if their family traditions will both be expressed, but some went, but they managed to keep the peace. While at sometimes they disagree in some situations, they always know how to end it right. Bennett has revealed that he and Ellen speak with one voice, which is usually hers.

Avery is Ellen's daughter. While you might think Ellen and Avery are alike, it doesn't seem so. While Ellen loves ponchos, pineapple, badminton, and writing notes on grains of rice, Avery doesn't very much like them. Like how Avery doesn't like the Jennings Christmas present tradition, without writing a list, while Ellen loves it so it could be a surprise. But even so if they aren't very alike to each other, they always love each other.

Tyler is Ellen's stepson, who she doesn't relate to at all, and can be a real handful to her, but she tries to help him do his best, while highlighting his weak points. She, like the rest of the family, is mortified by Tyler's driving.

Chloe is Ellen's stepdaughter. She can be over the top! In the first episode, she ignores Chloe's claim that "Stan can talk!", but tries to savor her cuteness in The Fast and the Furriest. She was also against Chloe getting earrings. Ellen and Bennett often accidentally leave her at some random place.

Ellen doesn't really like Stan because she is a cat person. She is the only person in the house who doesn't like him. She even tries to make him a outside dog in The Parrot Trap. Even though they don't really like each other they sometimes get along.

Ellen reveals that she once had a dog as young girl, and they were close. But one day the dog ran away, and Ellen didn't want another dog because how hurt she was. Upon learning this, Stan makes an effort to be nicer to Ellen, which makes her happy. 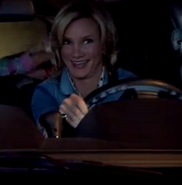