Flight
Ellroy (original Italian name: Bruto) is a myna bird, but is often portrayed as an anthropomorphic raven. He is the adopted son of Ellsworth, and often works with Mickey Mouse. just like his "godfather", he can use his arms as both hands and wings to fly. Ellroy was created in 1979 by Romano Scarpa.

In the tale, "Topolino e il rampollo di Gancio" ("Mickey Mouse and the Son of Ellsworth"), Topolino #1048 (Dec. 28, 1975) Ellsworth is battling with one regiment of birds against another. A bird from the enemy camp is captured and pleads for help from Ellsworth claiming his "son" is hidden nearby and that if he is unable to return, his son will be left an orphan. Ellsworth checks out the prisoner's claim and indeed finds a fledgling among the rocks. Now believing the prisoner, he takes pity and secretly releases the prisoner. However, he soon discovers that the prisoner lied, and the young bird he found was in fact, already an orphan, and was simply used as a matter of deceit. Feeling sorry for the young bird, Ellsworth adopts him, naming him Ellroy (after his own name, Gancetto in Italian, meaning "Little Gancio", Ellsworth's Italian name). Under Ellsworth's guidance Ellroy grows up in Goofy's house and learns to be very much like his adopive father, though not nearly as mischievous. Ellroy soon befriends Mickey, and becomes an adventuring sidekick for him (much as Horace Horsecollar, Goofy, Butch and Eega Beeva have done before). In many stories Ellroy lives in Mickey's home, because his father seems to be involved in some adventures in exotic locales. There are very few tales where Ellroy and Ellsworth appear together, and as a result, one not familiar with his origin might not know they are two separate entities. It is very likely that Scarpa may have created Ellroy as sort of a "downgraded" version of Ellsworth, to avoid the risk of competition with Mickey that had affected the stories involving both Eega Beeva and the original Ellsworth as his sidekicks back in the fifties. As Scarpa himself said, "Gancio (Ellsworth) *is* too strong a character to play as a sidekick. He's got to be the star. Ellroy is duller, and highlights Mickey's role. The main differences between Ellsworth and Ellroy, physically, are that Ellroy is slightly smaller and wears a baseball cap (instead of a barret like Ellsworth does), and that Ellroy usually wears pants, while Ellsworth does not. Also Ellroy's beak tends to be more pointed and shorter than Ellsworth's. It is not clear, however, if they are both supposed to represent the same species of bird. 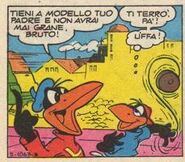 Add a photo to this gallery
Retrieved from "https://disney.fandom.com/wiki/Ellroy?oldid=3628246"
Community content is available under CC-BY-SA unless otherwise noted.