Being picked on
Elmer Elephant is the main character of the 1936 Silly Symphonies short of the same name.

Elmer is a timid, shy, sensitive, sweet-natured boy. Very much the reason why Tillie adores him. But unfortunately, this also makes him the target for bullies. Elmer is also very brave.

Elmer is invited to Tillie Tiger's birthday party, bringing her a bouquet of flowers. Tillie loves Elmer, but the other animal kids make fun of his nose and cruelly mock him when Tillie isn't around to defend him. Brokenhearted by their teasing, Elmer leaves the party and cries in front of the nearby pond. Elmer is reassured by a nearby elderly giraffe named Joe who admits to him that he used to suffer the same teasing about his neck. Just then, a fire breaks out at Tillie's tree-house with Tillie still in it. The rescue efforts by the other children as well as a monkey fire brigade prove futile. With the help of Joe Giraffe and some pelicans who resemble Jimmy Durante, Elmer successfully puts out the fire and rescues Tillie.

Elmer would later go on to star in his own comic stories in the Silly Symphonies comic strip, even getting his own short-lived comic strip. However, with the exceptions of the crowd shots in the later Silly Symphonies short Toby Tortoise Returns and a cameo appearance in Who Framed Roger Rabbit, Elmer was never again featured in animation afterward, although his name was mentioned on a punch card in the Mickey Mouse Works cartoon, "Donald's Rocket Ruckus". 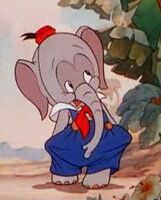 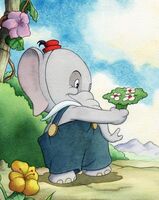 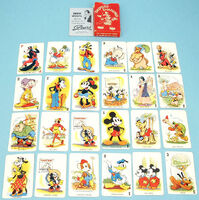