The Great Big Book of Everything, singing its theme song with Harry

Being used as the subject of spelling (as shown in "Spelling Bee Situation"), Harry's antics, mentioning baths, check-ups (formerly), getting stuck up a tree, waiting a long time for something to happen

She is a golden-yellow cat who associates with her pet companion Harry, with whom she sings the theme for the Great Big Book of Everything in every episode. She is shown to have more common sense than Harry, and is often annoyed by his antics. Despite this, the two get along with each other very well and often work together in sync. 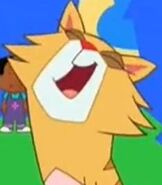 Retrieved from "https://disney.fandom.com/wiki/Elsie?oldid=4106843"
Community content is available under CC-BY-SA unless otherwise noted.